Dae Dae Hunter suited up and gave it go for one play. He gave Chandler a first down on his only carry. But it was back to the sideline to see who could pick him up.

He got a lot of help, especially from the guy whose senior season seemed lost.

Jaheim Brown-Taylor’s gritty runs put him in a spotlight that had gone to others in Chandler’s big stable of backs, helping punch the Wolves’ ticket to the first Open Division football state championship game in a 24-16 victory Saturday night over Tucson Salpointe Catholic at overflow Chandler Hamilton.

Chandler (12-0), which has won the past three 6A titles, will face another 4A power, Scottsdale Saguaro, a winner over Chandler Hamilton, on Dec. 7 at Arizona State’s Sun Devil Stadium to determine the best team in Arizona.

It seems only fitting that the state’s two biggest dynasties meet in the final game of the season. Saguaro has won six state titles in a row, all but one of them at the 4A level.

“It’s the final eight,” Brown-Taylor said, referring to the eight-team Open Division, the first of its kind in Arizona. “This is the best in the state. We still got the dub, and I’m glad to be a part of it.”

Without Brown-Taylor, there may be no Open final for the Wolves.

At least, first-year head coach Rick Garretson suggested that in his post-game media interviews and while addressing the team.

Brown-Taylor dug Chandler out of a hole after a penalty with a 41-yard run. That led to a MIkey Keene 15-yard touchdown pass to Jay McEuen. Brown-Taylor’s gritty 15-yard run in the third quarter set up another score, 16-yard strike from Keene to Jalen Richmond, giving Chandler a 17-13 lead.

Brown-Taylor sparked the offense, and the defense did the rest.

Without Hunter, and Eli Sanders never really able to get going, Garretson turned to Nicolas Nesbitt and Brown-Taylor to spark the run game. Both had their moments.

But Brown-Taylor had the biggest impact.

“Jaheim had his moment of greatness,” Garreton said. “We always talk about, when you get their opportunities, make something happen. I feel so elated for him, because we don’t win this game without those plays, his runs.”

Garretson pulled Brown-Taylor out as he addressed the team in the end zone, saying, “It’s not always going to be easy.”

“Guys have to makes plays when they get the opportunity,” Garretson yelled. “Where’s Jaheim.”

The players erupted in cheers as Garretson hugged Brown-Taylor.

It’s been a frustrating season for the senior, who two years ago won a state track title in the 100 meters. He had Division I football offers coming in after last season, when he backed up the state’s Player of the Year, DeCarlos Brooks

But when Hunter moved in from Colorado late this summer, he quickly asserted himself as not only the No. 1 running back on a back-heavy Chandler team, but maybe the second-best back in the state, behind Salpointe’s All-American Bijan Robinson. 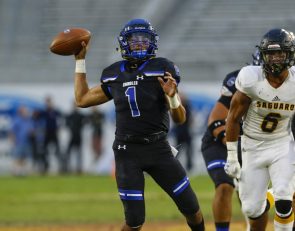 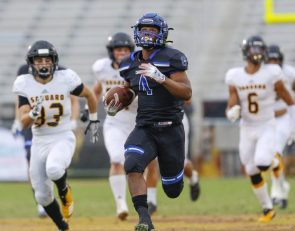 https://usatodayhss.com/2019/chandler-overcomes-salpointe-catholic-with-defense-jaheim-brown-taylor
No. 12 Chandler overcomes Salpointe Catholic with defense and a forgotten back to reach Open final
I found this story on USA TODAY High School Sports and wanted to share it with you: %link% For more high school stories, stats and videos, visit http://usatodayhss.com.