Shortly after his final game of the high school season, John Curtis (River Ridge, Louisiana) running back Corey Wren announced he had decommitted from Georgia.

Wren had originally committed to the Bulldogs over summer. After leading John Curtis to the semifinals and rushing for 1,146 yards and 17 touchdowns to go with 132 receiving yards and two touchdowns, the three-star recruit decided to look toward other options.

Prior to his commitment, Wren had been heavily considering Arizona State and Houston, according to UGAWire. He has 31 offers, according to 247Sports.

Wren is listed on the 247Sports Composite Rankings as the No. 25 athlete and No. 23 player in the state of Louisiana.

While he can line up in the backfield or as a receiver, with John Curtis’ run-happy offense, Wren took the bulk of the load at running back.

Georgia has had a strong recruiting class. Ranked No. 5 in the nation on 247Sports, it includes four-star offensive playmakers Kendall Milton and Marcus Rosemy, ranked No. 37 and 40 in the country, respectively.

Wren now will look toward a different school in which he could get immediate playing time.

Arizona State could be an option. With wide receiver Brandon Aiyuk projected as an early-round draft pick and running back Eno Benjamin a potential to enter the draft, the Sun Devils may be in need of offensive weapons next season.

As for Houston, Wren would immediately jump to the top of the Cougars’ recruiting class alongside wide receiver Reginald Johnson, ranked No. 513 overall (Wren is No. 520 overall). Leading wide receiver Marquez Stevenson and running back Kyle Porter are both juniors, giving Wren an opportunity to take one of their roles once they leave school. 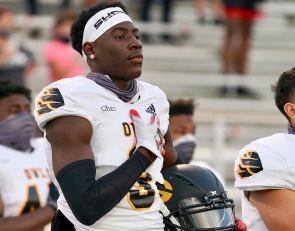