'Who is tougher?' Inside defensive stand that sent Don Bosco to NJ final

'Who is tougher?' Inside defensive stand that sent Don Bosco to NJ final

MONTVALE, N.J. – Claudy Robinson and the Don Bosco defense stood their ground. Now the Ironmen have a chance to be the last ones standing.

We can analyze and go over the multiple dramatic moments in the latest North Jersey non-public football war all we want, the penalties (so many penalties), the almost turnovers, but it all came down to one play, one snap.

Down 10-8 with a little over a minute to play and on the heels of a tremendous touchdown pass on fourth-and-6 from Michael Alaimo to James Morrison, St. Joseph lined up to go for two to tie the game.

Don Bosco coach Dan Sabella called a timeout. Standard football procedure. Look at the opponent’s personnel and make an educated guess as to what was about to happen.

“A lot of things go through your mind in that type of situation,” Sabella said.

The Don Bosco defense had been asked to shoulder the load all game long. The offense was largely toothless without injured running back Kyle Monangai, putting up only 102 yards all day and tallying only a field goal.

On the opposite sideline, the Green Knights were plotting.

“We had two different plays,” St. Joseph coach Augie Hoffmann said. “We were going to throw it. Then they called timeout. I always remember what Coach [Tony] Karcich said, which is you have to give the ball to your best player in that kind of spot and if it doesn’t work out, you can walk away with your head held high.”

“Right before the play, ‘I said who is tougher?’” said Ironmen linebacker Colin Ramos. “The answer was us.”

Alaimo handed the ball to running back Audric Estime who looked for a crack on the right side of the line. There wasn’t one. There was a sea of green jerseys and white, all clustered together at the one-and-a-half yard line. Estime was short.

One of the players in the middle of the mass was Robinson.

“I saw they were coming right at me,” Robinson, a sophomore, said. “I knew I had to make the tackle. The game was on my shoulders.”

“We felt Audric was our best player all year and was going to give us our best opportunity,” Hoffmann said. “On that snap, they were better than us.”

Caden Dana, who was another hero for the Ironmen as a punter, recovered the onside kick and the Ironmen could celebrate.

“I knew I was going to catch that ball and we were going to win this game,” Dana said.

Read the rest of the story at NorthJersey.com. 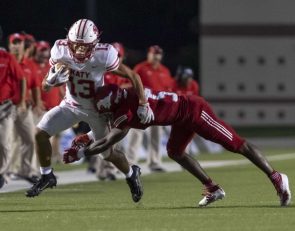 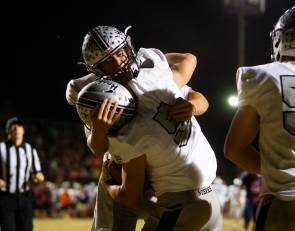 https://usatodayhss.com/2019/defensive-stand-sends-don-bosco-past-st-joseph-regional
'Who is tougher?' Inside defensive stand that sent Don Bosco to NJ final
I found this story on USA TODAY High School Sports and wanted to share it with you: %link% For more high school stories, stats and videos, visit http://usatodayhss.com.