Brown said Edwards and Francis both had talked about playing together in college.

“It’s something they have talked about if they had the opportunity,” Brown said. “They both had offers from some of the same teams.”

West’s Tyrece Edwards tries to get around a lineman during a scrimmage with Morristown West this spring. (Photo: Saul Young/News Sentinel)

“They both really liked Arkansas. I think they were the leader the whole time.”

Francis is the No. 29 prospect in the state and No. 58 outside linebacker in the country, according to the 247Sports Composite.

“(Arkansas gets) a very smart linebacker in Drew,” Brown said. “He is a very unique high school player. He likes to do it the right way. On the field, his technique is the thing that separates Drew.

“He loves the game and gives a relentless effort every play.”

Edwards is the No. 51 prospect in the state, according to the 247Sports Composite. He’s the No. 84 weak-side defensive end in the country.

“Tyrece, what separates him, is he is so explosive for a defensive end,” Brown said. “His first step is one of the fastest I’ve seen. He beats a lot of players.” 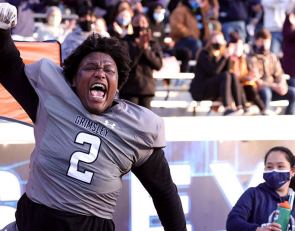 https://usatodayhss.com/2019/drew-francis-tyrece-edwards-commit-arkansas
Pair of three-star Tennessee high school teammates commit to Arkansas
I found this story on USA TODAY High School Sports and wanted to share it with you: %link% For more high school stories, stats and videos, visit http://usatodayhss.com.