West Virginia is on the verge of high school football history, with Kellie Thomas scheduled to serve her first game as head coach of Hannan High School in just more than a week. Now, that historic debut may have to wait, unless someone comes through with $7,000 to purchase new helmets for the program before then.

Thomas was the first at Hannan to arrive for summer training camp and learn that the team’s helmets had been stolen, per West Virginia NBC affiliate WSAZ.

“It’s pretty low thing to do. I hope their conscience gets the best of them because eventually I think we will find out who it was,” Thomas told WSAZ.

The NBC station reported that it’s expected to cost approximately $7,000 to replace the team’s stolen helmets, though the lack of head gear hasn’t stopped Hannan from practicing. Rather, the program has limited its practice routines to running, strength training and walking through pads. It will reach the final week before its season-opening scrimmage without any contact.

“I give credit to these guys here that come out every day and bust their rears because were used to adversity and we overcome it so this is just one obstacle and we’ll overcome it and we’ll be better and be stronger by it,” Thomas told WSAZ.

“It’s going to impact us whenever we can start hitting because if we don’t have them, of course that’s going to put us behind other teams in the state.”

Thomas has said she’s determined to get the team the helmets it needs, even if she has to take out a bank loan to do so. The hope is obviously that it won’t come to that, though no one is questioning the first-year football coach’s determination. 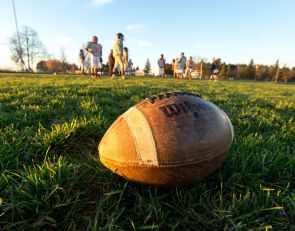 https://usatodayhss.com/2019/first-female-football-coach-west-virginia-stolen-helmets
First female football coach in West Virginia's team could miss opener because of stolen helmets
I found this story on USA TODAY High School Sports and wanted to share it with you: %link% For more high school stories, stats and videos, visit http://usatodayhss.com.