Lexi Campbell never meant to be a figure skater.

Though Campbell took to the ice immediately, she wasn’t particularly interested in becoming a delicate, graceful nymph.

Even at age 5, she wanted to play hockey.

With the encouragement of her figure skating coach – who noticed she “skated like a hockey player” after landing jumps – Campbell tried a Randolph boys rec team. She hasn’t stopped playing hockey since.

“Hockey, no matter what team I’m on, has brought me my second family,” Campbell said. “I felt like I was home, doing what I love most, and what I know how to do. Just being out there with the team, being able to help all the new players too, it’s not about me. It’s about me helping them learn what I know how to do best. Seeing them get happy when they make their first accurate pass, or their faces light up when they lift the puck over the goalie for the first time, it’s absolutely priceless.”

Campbell is a sophomore defender for the Randolph High School girls ice hockey team, as well as for the Ironbound Elite travel program. She played alongside boys in Randolph, watching the high school team play in the NJSIAA championship game when she was in elementary school and “wanting that glory and that feeling.”

Campbell may finally have her opportunity this winter.

Chatham senior Caroline Hannon smiles as she skates by the bench during hockey practice on Nov. 19. (Photo: Viorel Florescu / NorthJersey.com)

Chatham athletic director Bill Librera is organizing the first statewide girls ice hockey tournament, run concurrently with the NJSIAA Tournament. The girls final will be played at Codey Arena the same night in early March as two of the boys Group semifinals.

Read the Daily Record for more.

'We have to work extra hard:' New Jersey girl is co-captain of boys ice hockey team 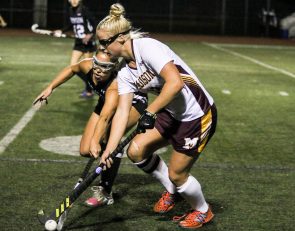