The rich continue to get richer, and it sure feels like Georgia won’t be headed to the college football poorhouse anytime soon.

On Monday, the Bulldogs added another major recruit, this time in the form of offensive tackle Tate Ratledge. A Peach State native and Darlington School (Rome, Ga.) star, Ratledge picked the Bulldogs ahead of fellow finalist Tennessee and scholarship offers from practically every power program in the SEC.

“I have kind of felt since January really it was Georgia, then I went to Tennessee twice in a row back to back and I was still feeling Georgia, so I knew then it was where I wanted to go,” Ratledge told 247 Sports.

Ratledge is the third four or five-star offensive line prospect to commit to Georgia’s Class of 2020. And as an All-American Bowl commit, he’s likely to get plenty of exposure to some of the nation’s remaining uncommitted studs come January with a straight line to try to convince them to head to Athens, too.

For now, Georgia will be plenty happy with adding Ratledge alone, particularly given the potential that he and/or one of his classmates might need to step in and contribute on the offensive line early. The comfort Ratledge allegedly felt with the Bulldogs should ease that process significantly.

“It is really where I felt the most comfortable,” Ratledge said during a Facebook Live interview with 247 Sports. “It was where I thought I could get to where I want to be one day with Coach (Sam) Pittman and everyone else there.” 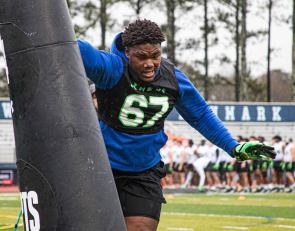 https://usatodayhss.com/2019/georgia-strikes-again-with-commitment-from-4-star-ot-tate-ratledge
Georgia strikes again with commitment from 4-star OT Tate Ratledge
I found this story on USA TODAY High School Sports and wanted to share it with you: %link% For more high school stories, stats and videos, visit http://usatodayhss.com.