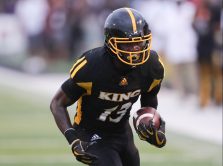 Analysis: It’s a rematch of last year’s championship game, which King took 41-25. Muskegon wants vengeance on that loss, and the team knows they can do it; earlier in the 2018 season, Muskegon took down the Crusaders 24-21. But King has extra motivation of its own after losing its first game of the season and dropping out of the Super 25.

Here are the top 15 matchups in high school football this weekend.