The National Federation of State High School Associations announced that there was a decline in high school sports participation numbers for the first time in 30 years last school year, according to the annual athletics participation survey.

This came less than a week after the Barrow Neurological Institute held a news conference about its latest survey that the percentage of Arizona parents allowing their children to compete in contact sports dropped from 82 to 65 percent because of concerns over head injuries.

According to Barrow’s study, there has been a 26 percent decline in football participation over the past four years, from 20,929 students in 2015 (per the NFHS) to 15,406 in 2018 (per the Arizona Interscholastic Association).

How is the AIA dealing with that decline?

For the first time, it is allowing its member schools for all sports to form teams comprised of freshmen and sophomores, eliminating one of the lower-level programs, if the schools feel there is a need to do so.

“The point of that is that we’d like to have less cancellation of programs either at the freshman or JV level,” said David Hines, executive director of the AIA, the state’s largest high school sports governing body. “Some schools don’t have enough to play two lower-level teams, and they go with one at the lower levels.”

Tempe McClintock football coach Corbin Smith noticed the list on Twitter, and commented, “That probably needs to be updated.” He said that Tempe Marcos de Niza, Tempe, Phoenix Central and Phoenix North Canyon “have already sent us cancellation of our JV games.”

Read the Arizona Republic for more. 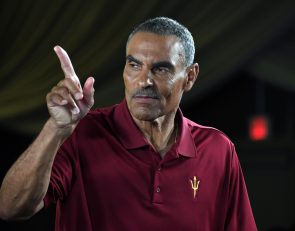 https://usatodayhss.com/2019/how-is-the-arizona-interscholastic-association-responding-to-national-high-school-sports-participation-declines-by-pairing-sophomores-and-freshmen-together
How is Arizona responding to national HS sports participation declines? By allowing 9th and 10th graders to pair up.
I found this story on USA TODAY High School Sports and wanted to share it with you: %link% For more high school stories, stats and videos, visit http://usatodayhss.com.