With upsets and exciting postseason moments, the top high school football plays of the week make you wish you could be at every game.

Hopefully, these can help give you a taste of football around the league.

With Thanksgiving approaching, here are the #HSSTop10 football plays of Week 14.

Vote for your favorite at the bottom!

Looking into the eye of an incoming blitzer, knowing you’re about to be tackled, and still making an on-the-money throw is difficult. You wouldn’t tell by watching Joshua Hardy.

The @saffordanthony to Joshua Hardy connection gets home again!@DunhamAthletics has seized a 22-13 lead late in the third quarter. #gametimela pic.twitter.com/l5hVo8nWg3

This wasn’t just an impressive catch with elite reaction time. Judging by the way the defender reached out, Alex Rosano might have stopped a big defensive play, too.

Watch this impressive one-handed catch by @Alex_Rosano17 on the pass from @whoward_ in the District 1 Class 6A Championship.#SCtop10

This crazy one-handed grab over a defender appears to be Izaiah Matheny of  Lake County in Tiptonville, Tennessee. He helped the team improve to 14-0 on the season and get to the Final Four.

Izaiah Matheny with the one handed catch! #SCtop10 @SportsCenter pic.twitter.com/OiRnJf1cjZ

I think @mason_falslev made an #SCtop10 catch today, but that’s just me. 🤷‍♂️ pic.twitter.com/PzPninbRLD

If you have a guy on your team who goes by Tank, you probably want to get him the ball as often as possible. Even if it takes a trick play like this. Looks like Cartavious “Tank” Bigsby can drag defenders. Great play design and execution.

Oh my what a play. Demetrius Coleman with a short completion to Antinez Blount, who pitches the ball back to Tank, and Tank goes the rest of the way for a touchdown, running over a few defenders in the process. Callaway leads Fitzgerald 21-10 late in the first half. Wow. pic.twitter.com/pUbFf1SG3M

Here’s the weekly reminder to never give up on blown coverage or a ball that seems out of reach. Sometimes, all it takes is effort and a friendly bounce to corral it, which Trust Wells — another player with a great name — did.

The @iowa_corn play of the game went to that crazy interception play. What a catch 🏆🏈 #iahsfb pic.twitter.com/5ze7lMjucs

This hit hurt us just watching it. No idea how Jaylan Knighton stayed on his feet.

Heaving it across your body on the move is generally frowned upon. Sometimes, it’s all you can do. Kristian Story made a miraculous throw that somehow got through a defender’s fingertips and ended up in the leaping hands of Seidrion Langston.

This play couldn’t make the highlights because of time, but this play by @LanettPantherFB stars Kristian Story @kks___4 and @seidrion Langston…these guys just continue to WOW you. The Panthers are moving on to the Final Four! @WRBLSports @MaxPreps #SCTop10 pic.twitter.com/8OEcGS92pV

Slow-mo replays are great, but at full speed at this angle, you can really take stock of just how fast the game moves and how difficult a catch this must have been for Devonta Smith.

Rockwall and No. 9 Allen had gone back and forth all game, with explosive offense and little defense. Rockwall knew if it could get one stop, it could win. With 1:23 left, this trick play gave the Yellow Jackets the one-point lead and game-winning score over the national power.

My lord. @RHSYJfootball just took the lead on the most insane two-point conversion. 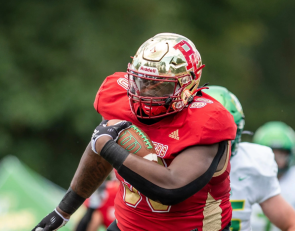