More and more teams are playing.

You want to see great catches? Recognition for blocking? A walk-off pick-six? We’ve got you covered in this week’s top 10 high school football games.

Vote at the bottom for which play you think was the best!

For context: Ricky White dropped what should have been a go-ahead touchdown against No. 11 St. Joseph’s Prep 50 seconds earlier. He made up for it with a ridiculous catch around the helmet of a defender, and then this game-winning grab.

Grace Brethren (Simi Valley, California) upset Oaks Christian (Westlake Village, California), and this was one of the best plays of the game. Mikey Zele dropped a dime into the hands of Nate Bennett, who caught it with a defender in his face. He even held on through an injury.

8. Interception through the hold

Sometimes, committing a penalty is just something you have to do. Interception coming? Just make sure the defender doesn’t get it.

7. With a little help from my friends (opponents)

It’s pretty devastating as a defender to know that you had strong coverage, but the receiver used your body to help him grab the ball.

Josh Gaton made the wild catch and scored.

How did he do that!!!!
Morton Ranch (@MRHSMavericks ) takes the lead over Cy Lakes

Watch the video, and look at the reaction of Josh Alford (No. 1, on the sideline) on the sideline around the 0:16 mark. We can’t say anything his face doesn’t.

Normally, G/DT Elliot DeGroote does the blocking and WR/SS Joey Hobert gets the ball. On Friday, they flipped their roles.

DeGroote, the 6-foot-3, 250-pound athlete, picked off a pass and turned up field. Hobert was in the secondary — but he sprinted down with him. Hobert pinballed off three potential tacklers in succession as DeGroote approached the end zone and scored.

Stallions intercept and herd together to protect 🐴 @sjhhsfootball | #PrepZone pic.twitter.com/Rp9gKqLgI5

This prayer was not answered. The last-second Hail Mary went awry in the 14-14 game, and Jake Pitre ended up intercepting the pass and taking it 90 yards to the house for the win. South LaFourche won 20-14.

So that last play of HLB/SL jamboree. Jake Pitre picks it off and returns it all the way as time expires to win it for Tarpons. pic.twitter.com/IXLQChh9rT

Maryville’s @Cadechambers_03 isn’t slowing down anytime soon. With the Rebs up 28-7, and just seconds left in the first half, Chambers launches it 55 yards downfield for the TD.

And sometimes, no context is needed for a play. We can appreciate an incredible grab when we see one. This is one of them, courtesy of Jack Crumblish.

Derek Wilkins didn’t waste a moment in this play. The ball-carrier barely even established control of the ball before the Santa Margarita (California) defensive end was there to strip it. The Eagles lost, but this defensive strip and touchdown was mighty impressive.

Scoop n’ score! Shane Cova gets the Eagles on the board. @SMCHS_Football | @SMCHSAthletics | #PrepZone pic.twitter.com/TJkJI5fkru 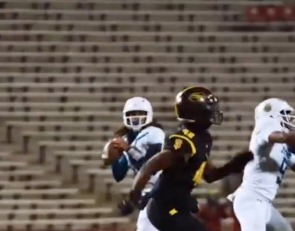 Social Buzz of the Week: Top high school football highlights from around the gridiron