Are bagels and juice the breakfast of champions? The Woodbury football team hopes to find out.

While most New Jersey football teams strap on the pads and buckle chinstraps on Friday night, Woodbury is one of the few teams to host home games on Saturdays. And at Woodbury, kickoff comes early – usually 10:30 a.m.

It’s a tradition that dates back as long as head coach Anthony Reagan can remember. He is a Woodbury graduate, and his staff includes alumni dating back to the 1980s. All played in daylight, a different atmosphere Reagan said has become “a rite of passage … part of the Woodbury family.”

The idea of football equaling “Friday Night Lights” has become a national myth, inspiring a book, movie, and television series based on Odessa (Texas) Permian’s 1990 season. But not every high school varsity football team kicks off on Fridays.

Though it’s a growing trend in New Jersey, there are schools where day games are still the standard.

Though no coach contacted by the USA TODAY NETWORK New Jersey had statistical evidence, they all believe playing in daylight can be a home-field advantage, shaking opponents out of their night-owl comfort zone.

Players on Saturday squads are already accustomed to the early-morning alarm clock, when Friday-night teams are normally “licking their wounds and watching film,” like Colts Neck coach Matt Ahearn used to do when he was defensive coordinator at Red Bank Catholic.

The Woodbury coaching staff sets up continental breakfast for the players at 8 a.m. – bagels, fruit and orange juice. The team meal is at 9:30 at Bergenfield, which usually kicks off at 1 p.m. Colts Neck and Marlboro both moved their kickoff times up to noon last fall, “just a little thing to throw off the timing of everybody else,” Ahearn said.

“I’m a very energetic person. I find myself trying to help them in that cause to the best of my ability,” Reagan said. “Not that I’m Knute Rockne, but you kind of have to be enthused when you’re playing that early in the morning.”

Despite the potential struggle to get high school student-athletes out of bed early on a Saturday, no team has a Friday night curfew. In fact, watching other teams play on Fridays is encouraged, both as an opportunity to scout and for bonding.

Woodbury hosts a team dinner before the players go to a game together, but Reagan hopes they’re in bed by 10 p.m. – and in the locker room around 8 a.m. the next morning to “get into that football mode” before the walk-through and last-minute preparation. Lovey’s Pizza & Grill in Morris Plains caters Morristown’s Unity Dinners for the whole football program and cheerleaders on the nights before games, each geared toward a particular theme.

Read the Daily Record for more. 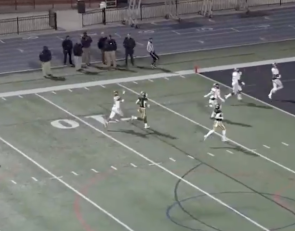