Kristin Meyer knew she had something special in Caitlin Clark. She marveled at the incoming freshman’s abilities during Dowling Catholic’s summer camp in 2016, when newcomers got their first chance to practice as a Maroon.

She might not have realized just how special Clark was until later that summer, though, when she got a phone call from Texas assistant coach George Washington.

“I had never talked to that high level of a Division I coach — especially about someone who hadn’t played a high school game yet,” Meyer said. “Right then I was like, ‘OK, this could get interesting over the next couple years.'”

Clark blossomed into a national recruit. By her sophomore year, she was already regarded as a five-star, top-10 prospect. Iowa, Iowa State and Drake were all over her. Texas was quick to jump in. National powers such as Notre Dame, Louisville and Oregon State started calling.

Now, as Dowling prepares for next week’s Class 5A state tournament, ESPNW deems Clark the No. 4 recruit in the country’s 2020 class. Blue Star ranks her No. 3.

The 5-foot-11 point guard is averaging a state-best 32.2 points per game. With at least one game next week at Wells Fargo Arena and her senior season left, she could break Iowa’s all-time large school scoring record of 2,494 points, which was set in 2000.

A prospect like that can take her time with her college decision. Clark is doing just that.

Clark does have a main group of schools on her radar: There’s the in-state trio of Iowa, Iowa State and Drake, plus Texas, Oregon, Oregon State, Notre Dame, Duke, Florida and Creighton. Missouri has also been in to see her this year.

In addition to many visits to the in-state schools, Clark and her father, Brent, took unofficial visits to Oregon, Oregon State and Texas in the fall, and she has taken unofficials to Notre Dame the past two summers.

“I just don’t think she honestly knows where she wants to go,” Brent said. “There’s so many positive reasons to staying local. And there’s positive reasons maybe to going more that national-brand route, if you want to say that.”

Juniors can start taking official visits on the Thursday following the NCAA women’s basketball championship game. Clark doesn’t know how many, if any, officials she’ll want to take.

Among the top factors in her decision? Style of play and coaching, family culture and, maybe most importantly, the opportunity to make an impact right away.

Iowa, Iowa State and Drake are pulling out all the stops to land the in-state mega-recruit.

On Drake, Clark said: “I grew up a Drake fan. I went to a lot of girls’ games, I was a big fan. (Head coach Jennie Baranczyk) went to Dowling so she comes to our games, and she’s just been a good resource for me to talk about recruiting and things like that — even if it’s not about Drake. But she has something special there.”

On Iowa State, she said: “Iowa State, they’re really good and they have a lot of really good recruits already. So they’re definitely building for the future, I would say. They’ve been recruiting me probably one of the longest, for sure. Same with Iowa.”

On Iowa, she said: “(Associate head coach Jan Jensen) is the one recruiting me from there. I really like Iowa. I’ve taken two or three visits there. They’re really good. I watch a lot of their games. Megan Gustafson, she’s crazy. Megan Meyer, who will be playing there next year, I play Attack with her so I know her well.”

Clark’s recruitment started in the summer before seventh grade. That’s when Brent first remembers coaches actually paid attention to his daughter as she played up two age levels with All Iowa Attack.

That fall, Clark received her first letter of interest. It was from Missouri State.

Things moved quickly. The summer after seventh grade, Clark played with high school freshmen on All Iowa Attack’s 15-and-under team. The following summer, she played up with the 16-and-under and 17-and-under rosters.

“She can do things on the basketball court that very few athletes can do,” Meyer said. “(Colleges) know they can make her a little bit stronger, a little better shooter, a little bit quicker and all those things. But to have that understanding of the game — and to be able to play at a high level at a fast pace and have pretty good size for a point guard — I think all those factors make her stand out.”

Colleges can’t directly contact girls prospects until Sept. 1 of their junior year, so all the earlier communication went through Meyer or Brent. After live periods in April or July, Meyer would sometimes have 10 schools asking her to contact Clark on their behalf.

Meyer’s phone would light up on Clark’s birthday, too.

“(It was) a little bit strange to pass along — to tell a 16-year-old happy birthday from an adult,” Meyer chuckled.

Clark said Meyer and her parents did well to insulate her from the pressures of a blue-chip’s recruitment while she was still a freshman and sophomore. Clark’s parents would talk plenty with coaches, but they never forced their daughter to pick up the phone.

Only if she wanted to.

They wanted Clark to live a normal high school life.

“I would actually say to any parent, if they’re in a similar situation, I think it’s really a smart thing to do,” Brent said, “because you also get a feel for what the programs are like. I say there’s almost two camps on this. There’s a group that I think is genuinely interested in your daughter for everything — the entire college experience, not just to be a basketball player. And then there are programs, which you can kind of sense that you’re kind of viewed as an asset to help them remain successful.”

The result of Clark not being thrown head-first into an intense recruitment?

“I’ve been asked the question, ‘What’s it like to coach her?’ And, to myself, to her coaches and to her teammates, she’s just Caitlin,” Meyer said. “Just fun-loving, passionate, goofy Caitlin. It’s hard to keep in mind that she’s such a top-tier player.

“Until you watch her on the court.” 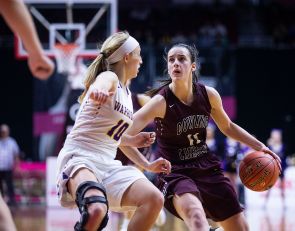 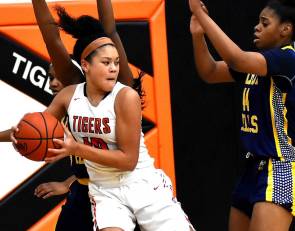 https://usatodayhss.com/2019/inside-the-national-recruitment-of-dowlings-west-des-moines-iowa-guard-caitlin-clark
Inside the national recruitment of Dowling's (West Des Moines, Iowa) guard Caitlin Clark
I found this story on USA TODAY High School Sports and wanted to share it with you: %link% For more high school stories, stats and videos, visit http://usatodayhss.com.