The West Des Moines Community School District has stopped the Valley football team’s volunteer chaplain from praying with players before and after games.

In a statement Monday, West Des Moines Superintendent Lisa Remy said the district received written concerns from parents that the prayers were a violation of the First Amendment.

In turn, the district asked “self-described chaplain” Chris Barr to refrain from working with the team while the concerns are reviewed by the district’s legal counsel, Remy said.

Barr did not pray with players Friday night when Valley hosted Waukee.

Praying at public school sporting events has raised concerns across the country.

An online petition to “Keep Chris Barr as Tigers Chaplain” started by a Valley football player, said members of the Valley team walked from the midfield logo to the end zone and kneeled to pray before Friday’s game in support of Barr.

The petition had more than 1,200 supporters before it closed Monday morning.

“It is necessary for district administration to work with the athletic director and coaches to determine and make appropriate changes,” Remy said.

Barr could not be reached at time of publication.

So what exactly is prohibited by law? 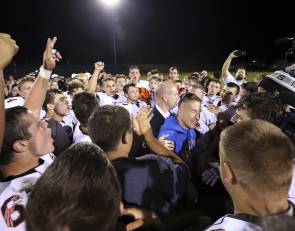 https://usatodayhss.com/2019/iowa-hs-prevents-chaplain-from-praying-with-football-players-before-and-after-games
Iowa HS prevents chaplain from praying with football players before and after games
I found this story on USA TODAY High School Sports and wanted to share it with you: %link% For more high school stories, stats and videos, visit http://usatodayhss.com.