One of the marquee matchups of Hoophall West ended up to not be much of a battle at all.

Chosen 25 guard Nimari Burnett said the key was on the defensive end.

“We know we can score at any given time with all the shooters and athleticism we have on the team, and we just gotta get in on defense and we was locking up,” he said. “The key thing was boxing out to get the rebound cause they have a lot of athletic guys.”

Prolific Preps’ Jalen Green torched the Bruins, matching his output in last year’s Hoophall West with 33 points. The No. 3 player in the Chosen 25, Green is largely similar to the player he was at that 2018 event with his sharpshooting and confidence.

The first basket of the game was a deep 3 by Green early in the possession, and to end the first quarter, Green got the ball on the other side of the court with about six seconds left, paused to see how much time he had, then raced down and drilled a 3 at the buzzer.

He’s known for his finishing abilities even more than his jumper, and he showed those off, making a tough layups through contact even through fellow Chosen 25 player Mike Foster.

But Green is expanding his game a little more, using his smarts to go with his insane athletic abilities. At one point he was matched up off-ball against 6-foot-3 sophomore Devontes Cobbs, who had two fouls, and Green practically begged for the ball while posting up. He didn’t get it, but Cobbs did foul him trying to prevent positioning and was subbed out. Green was frustrated he didn’t get the touch.

“Just working on my game, adding to my craft every day,” he said. “I’m just trying to look for different ways to score.”

But Prolific Prep is much more than just Green, which is a big difference from his previous school of San Joaquin Memorial (Fresno, California). Burnett finished with 13 points and the team as a whole was stellar from behind the arc.

“(The offense) is a lot of motion-based movement and knowing our guys,” Burnett said. “We know where each other are.”

Hillcrest Prep fought back in the third, but fell back behind by as many as 27.

One thing to be said about Mike Bibby’s offense: it has a lot of movement, even more than lots of college teams. But it looks like Hillcrest, with a drastically different roster than last year, is still getting used to each other and often didn’t see open players for passes.

Foster creates space on the floor simply by being on the floor as defenses send help toward him, but he couldn’t spot an open shooter on multiple occasions as he drove for tough layups.

Sadraque Nganga was perhaps the most impressive Bruin and finished with a team-high 19 points. He showed he has the skill to drive with a nice euro-step, flashed mid-range ability and is an excellent rebounder.

Just a sophomore, Nganga showed potential to be a dominant big with the capability to stretch the floor.

This is the toughest opponent Hillcrest (8-1) has played by far, and they were thoroughly outmatched. Nganga said they were cocky coming in. Now that the Bruins have seen they’re not unbeatable, they’ll have to find the proper mindset.

Prolific Prep (12-0), on the other hand, proved its meddle with a strong opening half and holding the lead.

“Usually we start off slow, don’t get going til the second half, so we just decided to come out and change some things,” Green said. 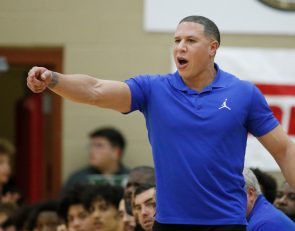 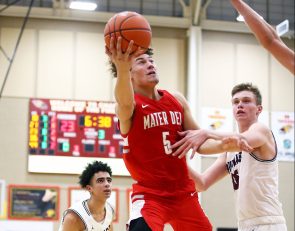