LaMelo Ball and SPIRE are dominant, but remain unranked in the Super 25

LaMelo Ball and SPIRE are dominant, but remain unranked in the Super 25

SPIRE Academy (Geneva, Ohio) is one of the most – if not the most – exciting high school basketball teams in the country, combining talented players with an up-tempo style of play that makes for mind-boggling highlights and sheer dominance.

SPIRE, which is 17-0 this season, boasts high school basketball rock star LaMelo Ball, who enrolled at the school in November.

That makes the next part a downright head-scratcher for the casual observer: SPIRE remains unranked in the USA TODAY Super 25 boys basketball rankings.

VIDEO: Watch LaMelo Ball pull up and drain a trey from midcourt

There are two reasons: SPIRE is not a member of nor recognized by any of Ohio’s state athletic associations. And LaMelo Ball is a former professional basketball player. 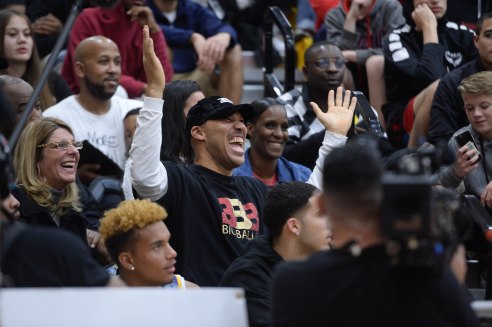 On Tuesday, Forbes reported that SPIRE was slated to participate in the prestigious Spalding Hoophall Classic in Springfield, Mass. this week, but backed out when an “outside consultant” demanded a $10,000 appearance fee for LaMelo. The report went on to say that SPIRE believed that the consultant was Big Baller Brand manager Alan Foster, who serves as LaMelo’s father LaVar’s business partner.

Just before his junior season, LaVar pulled LaMelo out of Chino Hills (Calif.) High School to focus on his professional career.

This season, LaMelo, 17, is putting up the type of numbers you’d expect a pro player to drop on high school guys, averaging 21 points, 9.2 rebounds, 10.4 assists and 3.9 steals a game.

His backcourt mate Rocket Watts, a Michigan State commit, is pumping in 22 points a game. Isaiah Jackson, a forward ranked No. 19 overall in USA TODAY Sports’ Chosen 25 for 2020, averages 15.2 points and 10.4 rebounds, and elite wing Myron Gardner is posting 17.6 points and 10.2 rebounds.

SPIRE’s average margin of victory this season is 21 points per game.

“It has been concerning and troubling seeing teams that we beat ranked in the Super 25 and not seeing the SPIRE name on there,” SPIRE director Justin Brantley said. “The reality, however, is that rankings don’t win ballgames and don’t get student athletes in college, which are two of the main pillars of success for SPIRE basketball.”

From a talent and production standpoint, SPIRE would undoubtedly be in the top tier of the Super 25 at this point in the season.

But the addition of Ball immediately subtracted previously scheduled games against marquee Super 25 teams such as No. 1 La Lumiere School (La Porte, Ind.) and No. 6 Oak Hill Academy (Mouth of Wilson, Va.).

After news of Ball’s arrival at SPIRE broke, Oak Hill Academy coach Steve Smith said he put a call in to the VISAA, Virginia’s state association for private schools of which the Warriors are a member, and asked about the rule on playing SPIRE.

“They said we couldn’t play them because LaMelo signed a contract to play professionally,” Smith said. “I would love to have played them. We play everybody, but our hands were tied.”

Virginia is one of several states whose state associations allow their teams to compete in the GEICO High School Nationals in New York City in April, the ultimate goal of every high school team in the country.

Other state associations that allow their teams to compete in the GEICO Nationals (Florida, Utah, Arizona, Washington, Georgia and Nevada, among others) have rules in place that prohibit their teams from competing against teams that have players who have signed a contract to play and/or played professionally, whether that player was paid or not.

Rashid Ghazi, creator and executive director of the GEICO Nationals and partner at Paragon Marketing Group, said that after examining the rules for the different state associations, SPIRE would be ineligible for GEICO Nationals.

“We go by what’s acceptable to the state associations for the teams that we select,” Ghazi said. “We’ve always had rules against fifth-year seniors, post-grads and followed the NFHS guidelines, but we’ve never had to address the rule about professional players because it doesn’t come up in traditional high school basketball. But the rule is in place.”

SPIRE,  however, was able to play No. 25 Bella Vista Prep (Scottsdale, Ariz.) in December and won handily 85-69. Additionally, the Ohio High School Athletic Association is one of the few states that allows its member schools to play non-sanctioned schools.

Melo filled the stat sheet in a SPIRE win over Bella Vista Prep then gave his shoes away! ⚡️@MELOD1P pic.twitter.com/Gs2ymU5jrb

“If one of our member schools chooses to play them, our rules and regulations are still expected to be followed,” OHSAA director of sport management Kathleen Coughlin said of SPIRE. “In terms of them having a player who has played professionally, due to them not being a member school, this has no bearing on our relationship to them. We are always willing to speak with any school regarding interest in membership.”

“The USA Today rankings are our official rankings and we use them as the guide,” Ghazi said. “SPIRE isn’t ranked in the poll or any other reputable poll for the same reason. At this point, we wouldn’t consider them without LaMelo because their season has been based on having him as a core part of their team.”

Gatorade Player of the Year 11hr ago

https://usatodayhss.com/2019/lamelo-ball-and-spire-are-dominant-but-remain-unranked-in-the-super-25-lavar-ball-big-baller-brand
LaMelo Ball and SPIRE are dominant, but remain unranked in the Super 25
I found this story on USA TODAY High School Sports and wanted to share it with you: %link% For more high school stories, stats and videos, visit http://usatodayhss.com.