Muhsin Muhammad III, son of the longtime NFL wide receiver of the same name, committed to Texas A&M Monday night. The North Carolina native picked the Aggies ahead of Alabama and Auburn, among others. The Myers Park High School (Charlotte, N.C.) star took his first official visit to College Station and committed to the Aggies just more than a month later.

“It was a once-in-a-lifetime experience,” Muhammad told 247Sports of the time he spent on Texas A&M’s campus. “It was my first official visit, but the visit went well, really well.

While it’s clear that the sheer scope of Texas A&M’s football passion made an impact on Muhammad, he could drive a difference himself. The No. 25 wide receiver recruit in the Class of 2019, Muhammad is also a top-six overall recruit from North Carolina.

While it’s early enough for Muhammad to change his mind before the Early Signing Period, there’s every reason to believe he’s as firm in his commitment as he lets on, which could make the 6-foot speedster one of Texas A&M’s most talented wide outs since current Arizona Cardinals receiver Christian Kirk. 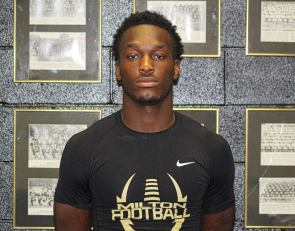 https://usatodayhss.com/2019/muhsin-muhammad-iii-commits-texas-am
Muhsin Muhammad III, son of NFL WR, commits to Texas A&M
I found this story on USA TODAY High School Sports and wanted to share it with you: %link% For more high school stories, stats and videos, visit http://usatodayhss.com.