Julian is a former NCAA DI basketball and tennis player. Julian is just one of many former college and professional athletes and coaches who are part of the Next College Student Athlete team. NCSA’s history of digital innovation and long-standing relationship with the college coaching community has made it the largest and most successful collegiate athletic recruiting network in the country.

The recruiting process is officially over for some of the top NCAA men’s basketball recruits. Yesterday, November 13, was National Signing Day for D1 basketball and all other sports besides football, kicking off the signing period for 2020-2021 enrollment. Athletes took to social media to announce and celebrate their college commitments. While the majority of this recruiting class made their school selection on the first day of the signing period, eight top 25 ranked basketball recruits are waiting to make their commitment.

Here’s a look at who signed with some of the best Division I men’s basketball programs in the NCAA on National Signing Day.

DJ Steward, the top ranked HS player in Illinois, makes it official with #Duke by signing his letter of intent. The Whitney Young senior guard said his main goal this season is to win a state championship. @swipasnipa @DukeMBB @WYoungBoysBball @CN100Sports pic.twitter.com/4tbQedZSdq

The Red Raiders locked down their first-ever five-star guard in Nimari Burnett, along with Micah Peavy and Chibuzo Agbo.

Bryce Thompson will stay in the Midwest, playing for the Jayhawks as the team’s first five-star recruit since 2018.

It’s been an amazing recruiting process, thanks to everyone for your support on this journey. So happy to announce my college decision! 🤩🥳

The Volunteer’s class of 2020 will include five-stars players Jaden Springer and Keon Johnson, and a four-star player Corey Walker Jr. 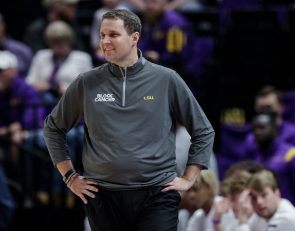