Spencer Rattler made his name in Arizona as the quarterback at Pinnacle High School (Phoenix).

With the release of Season 3 of the Netflix documentary “QB1: Beyond the Lights” on Friday, fans — and critics — around the country can get a closer look at Rattler, now a freshman at Oklahoma.

Don’t have time to stream all 10 episodes? We’ve got you covered.

Below are key Rattler moments for each episode.

Episode 1 – What’s Your Why

Rattler is a celebrity who moves like a mayor everywhere he turns and speaks as if he knows in order to be The Man, you have to walk it like you talk it.

The five-star recruit speaks with 98.7 FM Arizona Sports high school athletics show host Kevin McCabe and gives one of the most hubristic quotes of the documentary series when asked about the his detractors and competitors. “I love the hate, actually,” Rattler said to McCabe.

Despite winning a 6A state championship in basketball with his friend and azcentral Boys Basketball Player of the Year Nico Mannion in 2017, Rattler mentions how he wants to win an elusive state title in football for Pinnacle.

Rattler also explains his personality and why he people mistake him for being borderline arrogant.

“Oh, definitely, God has blessed me with a talent that not everybody has,” Rattler said. “But, you have to work on that ’cause somebody could easily catch up with you.”

“With me, I don’t want everybody to be as good as me. That’s how I kind of bring it to every game,” Rattler said. “I don’t call it cocky. I just call it being confident in your abilities and you just gotta go out there and have fun with it. I just really have fun.”

It’s the first day of 2018 school year which shows Rattler shows how much he still enjoys being in high school. Pinnacle head coach Dana Zupke tells the Pinnacle football team about how to recognize their power and to remain humble with every step forward.

“Some of you guys get all kinds of advantages because you are a football player, whether it’s from your peers or from teachers, security, whatever,” Zupke said. “I’m not saying it’s right, but it is what it is. But, in reverse, because you’re a football player, they’re hoping you mess up or they’re finding everything they can. And one of the biggest things that you have to be able to sell when you leave this place is yourself, whether you play football at the next level or not.”

Here are some other highlights from Episode 2:

— Members of the football team debate forms of art with Rattler proclaiming that he likes to draw before showing teammates a sketch. You’ll have to grade his skill yourself.

— Weight training, working with Pinnacle offensive coordinator one day before facing Gilbert Perry in a playful competition trying to throw a football into a trash can located in the end zone from the 40-yard line (which he magically did from a mountaintop at ASU back in April).

— Rattler shows off his boisterous personality, his leadership skills, arguing with Pinnacle’s offensive coordinator about play calls in the red zone. He jokes with officials, one of whom says “go, Sooners” and gives him a fist bump. Pinnacle backup QB J.D. Johnson reassures him when the pressure from Perry increases in the second half before the team easily wins 59-33 in what Rattler calls a “statement game” in an interview with azcentral’s Richard Morin. He stops for fan photos before leaving the field.

Rattler plays pranks with teammates and reiterates his claim that he’s a kid who just likes to have fun. He also explains that he didn’t early enroll so he could focus on being a kid, spend time with his girlfriend and family his senior year despite committing to OU after his junior year.

“The decision to not early enroll was my decision, Rattler said. “I just want to have fun my senior year. My family, her, my friends, everybody I love, I want to stay a little longer.”

Also in the episode, we see Rattler isn’t great at bowling. Maybe the ball is too round.

Here’s a clip of @Netflix “QB1” on which former Phoenix Pinnacle QBs Spencer Rattler and JD Johnson competing together against the team defense and pushing each other as leaders of the team during and after the contest in practice in 2018. pic.twitter.com/YfZSOfiVdN 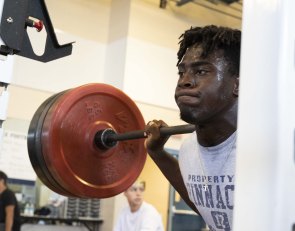 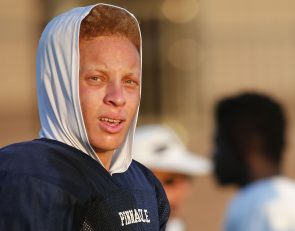 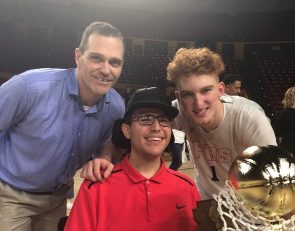 https://usatodayhss.com/2019/netflix-documentary-spencer-rattler-qb1-beyond-the-lights
How did Netflix portray Spencer Rattler on 'QB1: Beyond the Lights'?
I found this story on USA TODAY High School Sports and wanted to share it with you: %link% For more high school stories, stats and videos, visit http://usatodayhss.com.