Class of 2020 forward Myles Wilmoth committed to Butler on Wednesday on social media.

The 6-9 forward at St Andrews School (Barrington, R.I.) is considered a three-star prospect by 247Sports, listed as the No. 1 recruit in the state of New York and No. 245 nationally.

He earned first-team honors on the state’s All-USA Super Team as a junior after averaging 14.3 points and nine rebounds per game.

Wimoth helped the Saints win a New England prep school championship this year, scoring 15 points, including a couple of 3-pointers, and grabbing 13 rebounds in the title game.

He also had offers from Rhode Island, Massachusetts, La Salle and others.

Wilmoth is Butler’s second commit of the 2020 class.

Last year, Butler went 16-17 and lost in the first round of the National Invitation Tournament. 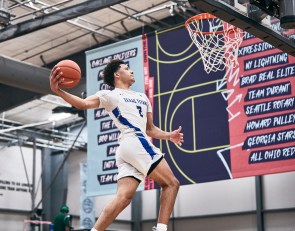 https://usatodayhss.com/2019/no-1-ny-myles-wilmoth-commits-butler-basketball
No. 1-ranked New York boys basketball prospect commits to Butler
I found this story on USA TODAY High School Sports and wanted to share it with you: %link% For more high school stories, stats and videos, visit http://usatodayhss.com.