WEST NYACK — Her maternal grandmother was born in Spain but carried the first name of her soon-to-be homeland – America.

America (Laurido) Albergo, who died in 2008, would be proud, her granddaughter says.

As it is, America’s daughter, Sharon, is ecstatic.

It’s not as far fetched as it seems. Each of the 16 teams in the July 15-25 championships is allowed three players with foreign passports on its 18-player roster, provided a player’s parent or grandparent hails from the involved country or a spouse (if both player and spouse reside in the country.)

Quigley understands spoken Spanish, which should be more than enough to get by. Most of her teammates are fluent in English, with the majority first exposed to lacrosse while either attending high school or college in the U.S. Since many players in the tournament speak English, Quigley’s teammates will speak Spanish on the field to help ensure they’re not sharing strategy with opponents. .

Quigley’s interrupting her job hunt for the championships.

In May, she obtained her Masters degree in social work from NYU, while completing her third year as Clarkstown South’s coach.

Quigley played lacrosse at South (Class of 2010) after learning the game starting at age 10 in the Suffern youth lacrosse program. She had an in there, since her dad, Andy, who died in 2011, was a Suffern teacher and good buddies with Suffern varsity girls lacrosse coach John Callanan, who now coaches against his old friend’s daughter.

Upon graduation, she had the typical athlete’s “my-playing-days-are-over” letdown.

“I never thought I’d have this chance. I’m so lucky I have the opportunity to be able to take it and experience,” she said.

The experience has already given her many frequent-flyer miles.

Quigley, inspired by former fellow Clarkstown South teammate Erin Riley (Class of 2011), who played for Ireland in the 2017 women’s lacrosse World Cup, went to a tryout with about 50 players in Madrid last September after contacting Spain’s coaches via email.

Clarkstown South girls lacrosse coach Sarah Quigley at the school July 6, 2019. She will play for Spain at the women’s lacrosse European Championships in Israel. Her grandmother was born in Spain (Photo: Peter Carr/The Journal News)

She was named to Spain’s training squad in December and returned to Spain in January and February for team practices.

In April, Spain played in a six-team tournament in Latvia, the highlight being her team’s win over Belgium.

After the tourney, she was officially named to the squad.

Last month, Quigley returned to Spain twice for practices, one of those trips including a scrimmage against the University of Notre Dame.

Although growing, lacrosse is a relatively small sport in Spain. Quigley has helped the growth effort by donating youth sticks and other equipment during trips there.

A women’s league that includes teams from the major hubs of Madrid, Barcelona and Seville has been around since 2004 and multiple players on the national team play in it.

The international women’s game is similar to the American girls high school game, except sticks may not have the new mesh baskets.

Fifteen of the 16 teams playing in the European Championships will qualify for the 2021 World Cup, which will be held in Maryland.

So, Spain’s goal is to finish anywhere but last.

Quigley, who’ll see a familiar face in Israel with Riley continuing to play for Ireland, thinks that’s doable. Her squad, she said, has improved every time out.

“Everyone has learned to really work together with each other,” she said. “It’s great to see.”

And what would playing in the World Cup mean to her?

“To play in the U.S.,  in front of a whole new generation of fans,” she said, “would mean the world.” 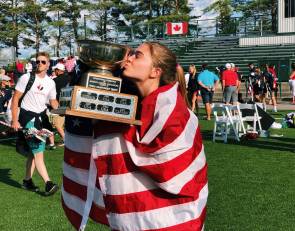 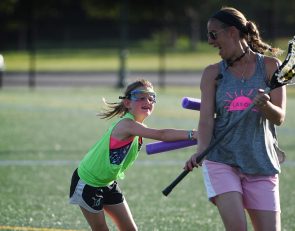 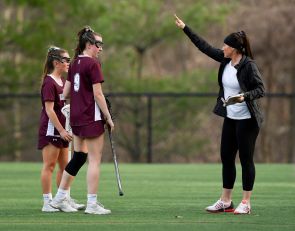 https://usatodayhss.com/2019/ny-high-school-lacrosse-coach-captain-spain-team
She doesn't speak Spanish, but NY coach captaining Spain's team is fluent in lacrosse
I found this story on USA TODAY High School Sports and wanted to share it with you: %link% For more high school stories, stats and videos, visit http://usatodayhss.com.