“Anastasia will end up being a very special player at the next level.” -Coach Eric Jacobs

Aside from her athletic ability, what makes Anastasia an attractive recruit?

“Her work ethic is what separates her from other players. Anastasia has a way about her, unlike many other players I’ve seen or coached. She’s always working, she’s always trying to improve. She just has the fuel to be the best and it’s so easy to see. You could spend a very little amount of time with Anastasia and realize very quickly that success, and doing things the right way, is what drives her. She is that kid that will be the first one to the field and the last one to leave. She is the kid that will figure out what it takes to win. It’s not because she is told to be that way. It’s just who she is.”

What physical qualities will translate well for Anastasia at the next level?

“Anastasia’s speed and her technical skill will be huge for her at the next level. 9 out of 10 times, she’s the fastest player on the field, regardless of we’re playing against. She’s incredibly fast and she’s equally the same as a goal scorer. Anastasia’s shooting ability as a sophomore in high school is much more advanced than a normal player at her age. From the standpoint of an attack, Anastasia is a very intimidating player to defend. Because of her speed, her ability to beat players one-on-one to find space and her ability to finish, Anastasia really can be a nightmare to defend.”

What is your message to any college program interested in Anastasia?

“If you decide to take a chance on Anastasia, you’re going to get something amazing back. This is not type of player where you question whether her ability will translate at the next level. This is a player that will do whatever is necessary to be the best collegiate player she can be. Couple her desire to play college soccer with her physical ability, Anastasia will end up being a very special player at the next level. She will be a huge, impactful addition to whatever program she decides on.”

If you or a student-athlete you know is interested in becoming a USA Today High School Sports Recruit of the Week, click here. 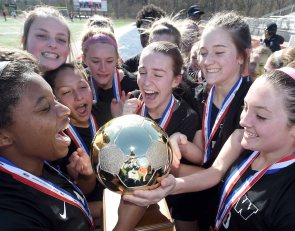 https://usatodayhss.com/2019/recruit-of-the-week-anastasia-smith-john-overton-high-school
Recruit of the Week: Anastasia Smith, John Overton High School
I found this story on USA TODAY High School Sports and wanted to share it with you: %link% For more high school stories, stats and videos, visit http://usatodayhss.com.