Shortly after the McDonald’s All-American Game rosters were announced, Scottie Lewis shot a message to the “Dunk Guru” who has helped every NBA slam dunk contest champion since 2013 with their stylings.

Chuck Millan, the founder of Team Flight Brothers, went to work looking at Lewis’ highlight footage. He came back with an idea:

Start off with that windmill over three people, the one Lewis had debuted at the 2017 City of Palms Classic slam dunk contest.

“Come out the gate with a perfect score,” Millan texted.

“Oh yeah that windmill one is easy,” Lewis responded.

Lewis, a Chosen 25 player out of Ranney (Tilton Falls, N.J.), calmly leapt over three peers and put home a windmill slam on his second attempt of the first dunk.

The fact that he missed the first one shocked Millan.

“He’s like money on that dunk,” Millan said. “When he missed the first one I was super surprised because I’ve never seen him miss that before.”

He finished the second attempt and was awarded a 79 out of 80.

That’s how it went the whole night: While Fran Belibi stole the show at the McDonald’s All-American Game dunk contest by putting on a display never before seen by a girls basketball player, Lewis’ dunks were just as impressive.

If they looked effortless, that’s because they were.

“Everything that he did was honestly kind of easy,” Millan said. “Those are like kind of subtle for him. Everything he was doing was pretty much like stuff that’s routine for him.”

The more difficult task was getting the crowd on his side.

“What I like to do when I work with guys is have them go out there with one of the flashiest dunks they have first,” Millan said. “Get the crowd on his  side, because if the crowd’s on your side, like 95 percent of the time you’re gonna win.”

“Get everyone really hyped on your back so the judges would be on your side as well,” Lewis said. “My energy was really high after that dunk and it just carried over through the next couple rounds.”

As one of the first dunkers of the night, the dunk over three people became all the more important. The next time somebody dunks over a person — which happened in the very next dunk — it’s not as impressive.

“Pulling out the props first … kind of takes it away,” Millan said. “If you’re just jumping over someone doing a one-handed dunk (after Lewis’ three-person windmill), your score’s not going to score as well.”

Lewis jumped over two people his next attempt, but on that dunk, it was a two-handed reverse slam. It took him two tries but he got a perfect score.

Again, just a reminder: These were easy.

“When he missed it the first time, it was like, what’s going on right now?” Millan said with a laugh.

So if these dunks were so easy, why didn’t Lewis go for harder ones? Why didn’t he really put on a show?

The main issue was the time limit, Millan said. In the NBA, dunkers have three attempts and all the time they need. At the McDonald’s All American dunk contest, they only have 45 seconds.

“The time limit kind of messes with the kids,” Millan said. “If you miss one time, you’re kind of in retreat mode.”

The other issue was simply spacing. Lewis didn’t have the whole court to gather speed, so he couldn’t access his full arsenal, which includes a windmill with a foot on the free throw line that’s “in his bag,” Millan said.

He settled for a windmill from a step within the free throw line.

There were a couple others in Lewis’ pocket he didn’t get the chance to use. A 360-windmill off the side of the backboard, for instance. An between-the-legs off the backboard. Kicking the ball while in the air.

Millan asserted that if there hadn’t been a time limit, Lewis might’ve pulled out something particularly special. Something that Millan said has only been done once.

He stopped himself from divulging what that was, though. 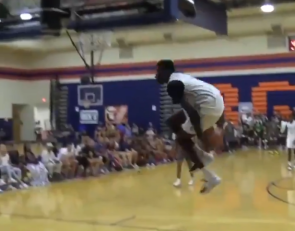 WATCH: Jimma Gatwech throws down an under-both-legs dunk during game 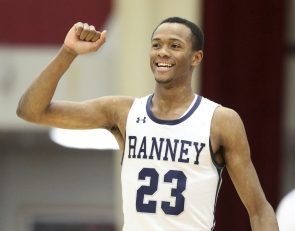 With enthusiasm for philanthropy, Scottie Lewis could be special beyond basketball

https://usatodayhss.com/2019/scottie-lewis-wows-mcdonalds-all-american-game-dunk-contest
Inside look at Scottie Lewis' 'routine' dunks and the guru who helped him with the Powerade JamFest contest
I found this story on USA TODAY High School Sports and wanted to share it with you: %link% For more high school stories, stats and videos, visit http://usatodayhss.com.