The Hoophall West’s most anticipated prime time Saturday night matchup between Sierra Canyon (Chatsworth, Calif.) and Goodyear Millennium lived up to expectations for the sold out crowd at Scottsdale Chaparral.

Sierra Canyon (7-0) overpowered the Tigers (4-2) with fast breaks ended by skyrocketing dunks, and stellar outside shooting beyond the arc to win 76-66.

The game’s biggest draw, Bronny James, son of LeBron, had 5 points and three rebounds in 21 minutes off the bench.

As both teams entered the gym and warmed up to Kanye West’s intensified song “Power” blaring through the P.A.speakers, the DaRon Holmes-led Millennium looked ready to battle and prove in the ESPN+ televised game that they were the best Arizona-based team Sierra Canyon would face all season.

“It’s really important that we gotta let them know where we are coming from, no matter who the opponent is,” Holmes said, who had team-highs of 20 points and 11 rebounds.

Boston asserted that his nationally top-ranked team is more than just about having marque names like James and Zaire Wade, who was sidelined with a boot cast on his right foot.

“We’re here to prove that we’re the best team in the country. That’s all there is,” Boston said.

After trading a few baskets and free throws in the early minutes of the first quarter, Millennium gained control early in the game with hard-nosed defense that scored off of three steals and Sierra Canyon’s five turnovers.

The Tigers went on a 16-7 run beginning at the five minute mark. It was sparked by Holmes, Justus Jackson (19 points), senior guard Robby DeVries (8 points) and senior shooting guard Jalan Early (10 points), who went 3-for-3 from the three-point line, to lead Sierra Canyon 20-13 at the end of the first quarter.

Sierra Canyon regained the lead in the second quarter as Boston and Bailey scored 14 of their 24 points, accentuated by Boston’s corner buzzer-beating three-pointer before halftime to lead 36-28.

“We just had to match their energy because they came out and hit shots and we just had to play better defense and better offense,” Boston said.

No. 16 Centennial blows out No. 18 Sierra Canyon to win SoCal Open Division title 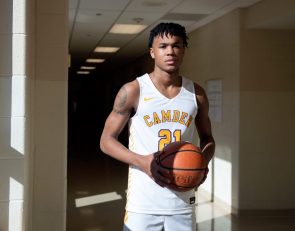 https://usatodayhss.com/2019/sierra-canyon-soars-in-dunk-fest-to-outduel-millennium-at-hoophall-west
Sierra Canyon soars in dunk fest to outduel Millennium at Hoophall West
I found this story on USA TODAY High School Sports and wanted to share it with you: %link% For more high school stories, stats and videos, visit http://usatodayhss.com.