NEW CASTLE, Ind. — Off the exit where a Flying J truck stop and Denny’s diner unite, a couple of miles down Ind. 3, tucked between a Steak ‘n Shake and the Henry County Rural Electric Membership Corporation, is that fiberglass sneaker.

Bigger than an elephant, it sits there, its color scheme changing based on the current whereabouts of a high school basketball player who hasn’t taken a shot during a game in this town since 1983.

It’s a bit of bizarre mixed with a little quirky and doused with nostalgia — a 55-room hotel paying homage to a former teenage basketball star in this town 48 miles east of Indianapolis. Steve Alford came to fame playing for his dad at New Castle High and went on to play for the legendary Bob Knight at Indiana University.

New Castle hasn’t been Alford’s home in three decades. And yet…

“He’s the king of New Castle, the reigning king, the former king, the king that will never go away,” said Charlene Schmidt, who was eating inside the White Castle just catty-corner from the inn. “People here think Steve Alford walks on water.”

The worst fight Schmidt ever saw was at a family reunion at the Henry County Memorial Park in New Castle. Her uncle from Kansas thought Alford was average, overrated and proof was in his “lame four years in the NBA,” she said. Her other uncle, a New Castle native, thought otherwise. The two actually brawled.

“Over Steve Alford, for Christ’s sake,” Schmidt recalled, laughing. “That’s just the way things go around here. Guess we don’t have much else to talk about.”

Of course, it’s not just the people of New Castle who have talked about Alford through the years.

Plenty of America knows of Alford, who won a national title with IU in 1987. He has coached basketball at Manchester University (back when it was a college), Southwest Missouri State (now Missouri State), Iowa, New Mexico and, most recently at UCLA, which fired him in December. He is set to enter his first season as head coach at Nevada. Hence the new paint job on the shoe.

Alford hasn’t lived in New Castle for more than 30 years. He is 54 years old. He has wrinkles and a few gray hairs.

Yet, this hotel isn’t about to forget him.

And even though the two-story hotel recently underwent major renovations inside, the Steve Alford All-American Inn feels a little outdated, a moment frozen in time of an old factory town’s adoration for a favorite son.

Read the rest of the story at the Indianapolis Star. 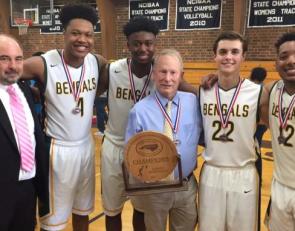 https://usatodayhss.com/2019/steve-alford-hotel-homage-high-school-basketball-hero
Steve Alford hotel is quirky, bizarre homage to a high school basketball hero
I found this story on USA TODAY High School Sports and wanted to share it with you: %link% For more high school stories, stats and videos, visit http://usatodayhss.com.