The football season may be over, but there is still more to be played.

After all, who could say no to a game in Hawaii?

At 7 p.m. HT on Saturday night — midnight, for Eastern Time Zone viewers — many top players in the country will take part in the Polynesian Bowl, played at Aloha Stadium in Oahu.

POLYNESIAN BOWL: Rosters |  Everything you need to know

Here are five things to watch for during the game. And don’t worry — if you fall asleep, it will be rebroadcast after the AFC Championship Game.

Two quarterbacks on Team Makai come from Arizona, and they’re among the underrated players in the country.

Four-star Jacob Conover hasn’t got as much attention as other star quarterbacks, due largely in part to the fact that he committed to BYU in May of his junior year and plans to go on a mission before beginning school. Recruitment buzz was minimal.

But Conover might have had the greatest career of any Arizona high school quarterback – ever.

In three years at Chandler (Ariz.), he passed for 10,098 yards at a 68.2 percent completion clip and threw for 102 touchdowns with just 16 interceptions. He was even more impressive in the playoffs and bowls.

In the postseason, Conover went an immaculate 14-0, throwing for 3,860 yards with a 68 percent completion rate, 45 touchdowns and five interceptions. With him under center, Chandler won three championships and two GEICO Bowl Series.

The other QB, Washington State commit Gunner Cruz, is the only quarterback in Casteel High School (Queen Creek, Ariz.) history.

The Colts hit the lottery when the football program began. All Cruz did was throw for 9,383 yards at a 72.8 percent clip, with 100 touchdowns and 16 interceptions over his career, which included an undefeated championship season in his junior campaign. He often sat out the fourth quarter of the blowouts.

He was largely unheard of because of his three-star rating and the fact that Casteel was a 3A school. But in Cruz’s senior year, the team jumped two alignments to 5A, the division for Arizona’s second-largest schools. Casteel went 9-3 and earned a playoff berth.

Neither quarterback has the name recognition of Chosen 25 QB Spencer Rattler of Pinnacle (Phoenix). But both are extremely talented athletes who will, with LSU QB signee Peter Parrish, lead the charge with the talented Team Makai cast.

In a game made up completely of stars, Team Makai seems to have the upper hand. They have all three five-star players (excluding kickers, punters and long snappers) and another three top-100 in 247 Sports composite rankings. That’s not including four-star Henry To’oto’o, who will not play due to an injury.

His absence will be felt, but five-star OLB Marcel Brooks and four-star Maninoa Tufono, the No. 197 player and No. 12 ILB in the country, can make up for it.

At the defensive line, Chosen 25 No. 3 Ishmael Sopsher will look to spread his reign of terror outside the mainland and show Hawaii what he can do.

After watching past Polynesian Bowls, Fa’atui Tuitele comes to game as player

Team Makai also has perhaps the best offensive lineman in the game, Jonah Tauanu’u. He’s a four-star OL, No. 66 in 247Sports’ composite rankings. That bodes well for the running back trio of Chosen 25 No. 5 Trey Sanders, 247Sports No. 92 Devyn Ford, and Boise State signee George Holani.

Defensive linemen of Team Mauka like four-star Faatui Tuitele, No. 70 in 247Sports composite, will have their hands full.

That’s good for Team Makai, because Team Mauka is well-suited to fight off the Arizona passing attack of the aforementioned quarterbacks and the wide receiving corps headlined by 247Sports No. 85 Elijah Higgins and ALL-USA Offensive Player of the Year finalist Puka Nacua.

While Team Makai appears to have the edge in the running attack and defense, Mauka boasts a trio of the best defensive backs on the field.

Beginning with Mykael Wright, the No. 42 player and No. 6 CB, who did not play this season after transferring, returned to the field for the All-American Bowl. He’s back for one more round in Oahu to show the competition what they avoided this year.

Then there is Marquez Beason, the No. 83 player. Listed as the No. 3 athlete in the country, he can play cornerback and wide receiver. That’s where it gets interesting: He’s listed as a WR on his 247Sports profile, CB on ESPN and DB on the Polynesian Bowl roster. Whether he forms a one-two duo with Wright or plays on offense – or, hopefully for viewers, both – it’ll be fun to watch.

Manning the rest of the field will be safety DeMarcco Hellams, the Alabama signee who is the No. 8 safety in the country.

Four-star Enokk Vimahi will represent Hawaii as one of the top players from the state and the No. 7 OG in the country. Meanwhile, OL Stacey Wilkins is an Oklahoma commit that’s capable of handling top defensive linemen, as he showed at the All-American Bowl.

Now, who will Mauka rush out from the backfield: Ohio State signee Steele Chambers, who rushed for 1,680 yards this season? How about Austin Jones, the No. 99 player in the class? Or maybe Sean Dollars, who helped Mater Dei (Santa Ana, Calif.) win the National Championship.

Polynesian Bowl Diary: Will it be Penn State or USC for 4-star DT D'Von Ellies?

Speaking of Chambers and Ohio State, Buckeye signee Jameson Williams is the top-ranked player in Missouri and No. 93 in the class. He’ll be paired up across from guys like Sione Vaki, who had 1,394 receiving yards and 20 touchdowns, and 6-foot-3 Colby Bowman, who was a premier target at powerhouse St. John Bosco with 920 yards and eight touchdowns.

And then they have a player who is by no means under the radar: Alabama signee Taulia Tagovailoa, who will return to the state where he played high school ball for two years. He’s bigger, smarter, and will look to show off for friends and family.

Even though they aren’t five-star players, they’re still studs who can challenge Team Makai. Remember: This is an all-star game.

The helmets are riddled with cultural influence. The red and blue colors represent Mauka (mountain) and Makai (ocean). Not coincidentally, those are the names of the teams. The uniforms are designed with the influence of kapa and tapa barkcloth, traditional fabric of the Polynesian culture.

Keep an eye on the sideline. In a bowl with more than 50 Polynesian athletes coming from four different cultures, with family in the stands and honorary captains Halota Ngata and JuJu Smith-Schuster, there’s bound to be cultural symbols and shows abound.

This includes traditional dancing during the halftime show.

Scenic views, incredible dancing and football. What else could you ask for on a Saturday night? 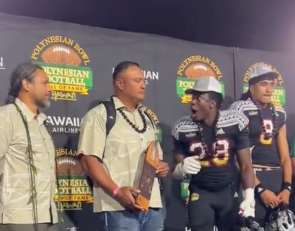 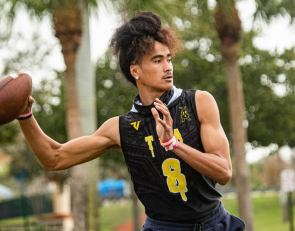 https://usatodayhss.com/2019/team-makai-vs-team-makau-5-things-to-watch-for-at-polynesian-bowl
Team Makai vs. Team Mauka: 5 things to watch for at Polynesian Bowl
I found this story on USA TODAY High School Sports and wanted to share it with you: %link% For more high school stories, stats and videos, visit http://usatodayhss.com.