It’s exceedingly rare for any college football program to receive a commitment from an elite student athlete before their sophomore season. Case in point: The current Class of 2022 includes just seven current commits.

One of those committed to a college already is Kobie McKinzie, who was the first player to pull the trigger from the Class of 2022. The Lubbock (Texas) Cooper High School linebacker picked hometown Texas Tech all the way back in February. To call his pledge a watershed moment for the program is an understatement.

While it’s preposterously early, McKinzie’s current 247Sports recruiting rating of 0.985 would make him the top prospect in Texas Tech history. He’s ranked as the No. 2 overall prospect in Texas and the top linebacker in the Class of 2022.

McKinzie was the first underclass commitment for new Texas Tech coach Matt Wells. He gave all the right reasons for committing to Texas Tech, and while he has continued to attend camps and events at other schools, there’s no reason to believe that McKinzie has his sights set on anywhere outside of Lubbock for the foreseeable future.

“Tech has always been a dream school and the coaches just made it feel right, especially Coach Wells–he’s the man–I can tell you right now that’s the guy I wanna play for in the future,” McKinzie told 247Sports shortly after committing. “And (Defensive Coordinator Keith) Patterson me and him had a great conversation and I loved everything about the visit.”

McKinzie will kick off his second season at Cooper in the coming weeks, but his rating and performance as a freshman is already working in Texas Tech’s favor. While getting any commitment so early in the process would be a boon for Wells and Tech, landing one of the nation’s top 40 overall recruits (per 247Sports) is another thing entirely.

With McKinzie now holding three years to proselytize the Wreck ‘Em Tech lifestyle to more high school teammates, opponents and fellow national showcase attendees, it’s not a stretch to say that he could be Texas Tech’s most important football recruit ever, at the ripe age of 15. 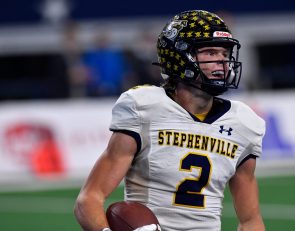 https://usatodayhss.com/2019/texas-tech-class-of-2022-kobie-mckinzie-most-important-recruit-school-history
Texas Tech Class of 2022 pledge Kobie McKinzie could be most important recruit in school history
I found this story on USA TODAY High School Sports and wanted to share it with you: %link% For more high school stories, stats and videos, visit http://usatodayhss.com.