The R.J. Hampton Blog: Down to four, reclassifying possibility and more

The R.J. Hampton Blog: Down to four, reclassifying possibility and more

Little Elm (Texas) junior point guard R.J. Hampton is one of the top players in the country, regardless of class, with a who’s who of college suitors to match his five-star status. Recently, Hampton was named first team ALL-USA and cut his list to four: Duke, Kentucky, Kansas and Memphis. Hampton, who is ranked No. 2 overall in USA Today Sports’ Chosen 25 for 2020, has agreed to give USA TODAY exclusive access into his world by chronicling everything from his recruitment to his everyday life in a blog.

What’s up guys it’s R.J. Hampton back here with a new blog!

Well, I’m officially down to four; in no order I’m down to Duke, Kansas, Kentucky and Memphis. I cut TCU because the main coach that was recruiting me was Corey Barker and he’s not there anymore. I just decided to focus on these four at this point.

With Kansas the main thing I like is the culture and the family vibe that Coach (Bill) Self and Coach (Jerrance) Howard have presented to me. They’ve been there since my freshman year and I love what they have going on.

With Duke, you can’t go wrong, you’ve got the best coach ever and just seeing what he did with the freshmen this year makes it a real hard option to pass up.

What I like about Kentucky is that Coach (John) Calipari is really focused on putting players in position to be successful and reach their dreams and goals and that’s how he’s able to win.

Memphis has the all-NBA coaching staff and they really know what it takes to get to the next level. They’ve been talking to me about helping me get to the best version of myself and that’s attractive to me.

I’m considering reclassifying to 2019 at this point.

I just wanted to see how the teams’ seasons ended and how the rosters were stacking up. What I’ll really be looking at with this decision is who’s there and how I’ll fit in with next year’s squad. I just really want to know how I’d be used in the system.

A lot of people think I just want to run the point and that’s it, and I do want to do that too, but if the coach needs me to play off the ball sometimes and guard the two or the three at times I’m fine with that too. I actually think playing with another elite point guard is a more attractive option because either one of us can bring it down and I can do what I do best and score the ball.

I think that makes us a more dangerous team.

Like you just saw today that Tre Jones is staying at Duke and I think that’s great. Kansas has Devon (Dotson); all of the schools have really strong point guards so, again, that only makes it a more attractive option for me.

Chosen 25 No. 2 junior R.J. Hampton's coach has been reassigned. What does that mean for Hampton's future?

I may get out to some schools to talk to some coaches in-person, but we’ll see.

I’ll make a final decision on reclassifying in the next couple of months.

This is my first time playing with Drive Nation so it’s gonna be fun. We play in the MADE Hoops event this weekend and I can’t wait for that.

This is also my first year playing on the Nike EYBL so it’s gonna be fun. I know it’s the best circuit with all the best players. I love competition because it just makes me a better player so I can’t wait until later this month when we have our first EYBL session.

Other than that, school is going well; I think my favorite class right now is my Professional Comm Class; just learning how to be a more effective communicator is interesting and something that I’ll definitely use.

Music-wise, I’ve been listening to a lot of Roddy Rich and Key Glocc and guys like that.

I want to say RIP Nipsey! I’ve been listening to a bunch of old Nipsey stuff too.

OK, I’ve gotta get going, but I definitely appreciate you guys reading my latest blog. I’ll keep you posted on everything so check back soon for my next blog. 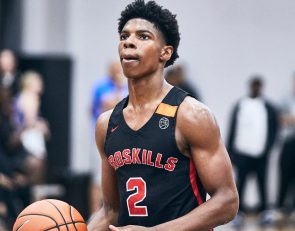 https://usatodayhss.com/2019/the-r-j-hampton-blog-down-to-four-reclassifying-possibility-and-more
The R.J. Hampton Blog: Down to four, reclassifying possibility and more
I found this story on USA TODAY High School Sports and wanted to share it with you: %link% For more high school stories, stats and videos, visit http://usatodayhss.com.