Kennedy Catholic School (Burien, Washington) linebacker Sav’ell Smalls is ranked No. 6 in USA Today Sports’ Chosen 25 for 2020 with a top six of Washington, Washington State, Florida State, Tennessee and Oregon. Last season, despite being sidelined after five games with an injury, Smalls posted 40 tackles, 21 for loss, seven sacks, 33 receptions for 673 yards and seven touchdowns. Now, Smalls has agreed to give USA TODAY exclusive access into his world by chronicling everything from intimate details about his recruitment to his everyday life in a blog.

What’s good everybody, this is Sav’ell Smalls, AKA Juize with a “Z,” and I’m just gonna give y’all a peek into what my life is like, lessons I’ve learned along the way and the trials I’ve been through on my journey.

This is my first blog so I’m excited to get it started!

Well, the biggest thing with me right now is I released my top six: Alabama, Washington, Washington State, Florida State, Tennessee and Oregon.

I always knew I was gonna release a top six around this time, but I didn’t know which schools I was gonna have in it.

I had my guy making the graphic so I could put it out, and he’d have it done then I’d tell him to redo it because I wanted to put different schools in. We went through that a few times.

It’s just a hard process because there are a lot of great schools to pick from, but I’m really happy with my six right now.

I don’t want any other schools hitting me up; I’m just concentrating on these schools, my season and my family.

I don’t have any set dates for visits, but I think that will all happen in December after my high school season. I don’t plan on enrolling early; I want to be in high school for the full year.

It’s easier communicating with the coaches now that my list is down.

I’ve whole staffs hit me up a few times before I cut my list and that’s just too much. Now I can take my time and get to know the coaches more.

In college I want to play the majority of my time on the defensive side of the ball at defensive end and outside linebacker. I feel like that’s where I’ll be in the best position to do big things and, hopefully, change the game.

I do talk to the coaches about potentially being in on offense every now and then, but we’ll see what happens.

I’m excited about my team this season. We’re pretty balanced, which is pretty rare in high school football.

We’ve got a big target on our backs this season because we’re talented, but that’s what I want. I want all of the pressure on us because it’ll mean that much more when we come out on top.

I’m just working on being a better player and a better leader. That’s what gonna get me to another level as a player so I’m locked in to that aspect of my development.

The goal is to win states, nothing less.

Most people know that I sat out half the season last year with a sprained PCL so I’ve missed this game so bad! I’m just excited to be back.

I’m excited to be starting my senior year too.

Most people say that high school goes by fast and I didn’t believe them, but it really does!

I plan to take full advantage and make memories that will last forever.

My freshman and sophomore year I had a 3.95 GPA, but last year I was going through a lot with my injury and therapy and stuff like that so now it’s down to a 3.7.

My plan is just to grind it out to get it back; just like I do on the field!

OK, of course I love music and I’ve gotta say that the new Young Thug is hard, Lil Baby hard, Palyboi Carti hard, a lot of guys… I also listen to a lot of old schools music like Luther Vandros, The Isley Brothers and all of that.

I listen to a wide variety of music as you can see!

OK, hopefully everyone is watching “Power” because that’s back on. If you haven’t seen it you can go stream it, but just know that you’re gonna be hooked and staying up all night watching it!

It’s the best thing on TV.

“Stranger Things” too! That was the theme for my top six graphic so as you can see I love that series too.

Other than that, make sure you check out my first game on Sept. 6 it’s at CenturyLink Field where the Seahawks play and it’s on ESPNU!

I’m gonna be amped and making a lot of plays and my teammates are too so it’s gonna be fun to watch.

OK, I appreciate USA Today for allowing me this opportunity, and thanks to you guys for taking a few minutes out of your life to learn more about me.

I’ve gotta go get back to the grind, but I’ll be back soon. 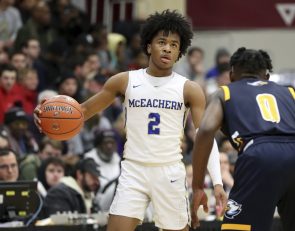 https://usatodayhss.com/2019/the-savell-smalls-blog-top-six-power-playing-on-national-tv-and-more
The Sav'ell Smalls Blog: Top six, 'Power', playing on national TV and more
I found this story on USA TODAY High School Sports and wanted to share it with you: %link% For more high school stories, stats and videos, visit http://usatodayhss.com.