At the Grind Session over the weekend, Bella Vista got revenge, taking down SPIRE in the championship game 96-94.

Zion Harmon, a five-star point guard, was named MVP of the game. He was not on the Bella Vista team in the first matchup of the season.

Enrolled at Marshall County High School (Benton, Ky.) but ineligible to play after the transfer, Harmon got permission to play for the Arizona prep team while continuing schooling at Marshall, according to the Courier Journal.

He has made a huge impact for the team since joining in January, boosting a squad already brimming with talent in four-star Arizona commit Terry Armstrong, four-star sophomore Addison Patterson and Jeron Artest, son of former NBA player Metta World Peace.

“We started Jeron Artest and he did a phenomenal job early on defensively against LaMelo, who didn’t hit his first shot until two minutes left in the first half,” Bella Vista coach Kyle Weaver told the Arizona Republic. “In the second half, we switched him off so he guarded LaMelo and also Rocket (Watts) and he did a really good job.”

Ball finished with 25 points on 5-for-15 shooting and had eight rebounds and six assists.

SPIRE trailed by 14 with about four minutes left but cut the deficit to as low as two. With a four-point lead, Bella Vista player Stephen “Junior” Garbrah knocked the ball away from a ballhandler and toward Armstrong, who retrieved it and got fouled around halfcourt with about two seconds left.

CONTROVERSIAL FINISH: Why it was the correct ruling

However, he continued on and dunked the ball. Teammates rushed the floor and a technical was called on the team with 1.3 seconds left.

Armstrong missed both free throws. Watts made both technical shots.

But SPIRE wasn’t able to corral the final entry pass and Bella Vista won by two.

It was the final game of the season for Ball, a senior whose future remains up in the air after playing professionally in Lithuania last year.

It was a tight finale for a four-win weekend from Bella Vista Prep that saw contributions from all over.

Artest was named MVP of the semifinals win over Prolific Prep (Calif.) for his 20-point, two-block performance, and Armstrong won the award in the win over ASPIRE on Friday (16 points, six rebounds).

Though it’s the last game of the season for both teams, it’s not the last time we’ll see some players.

Watts will also play in the Allen Iverson Round Ball Classic with Armstrong. 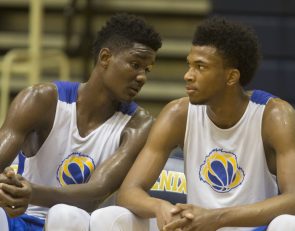 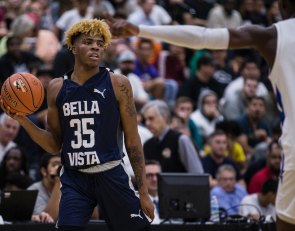 Controversial Bella Vista Prep/SPIRE finish: Why was there only one technical called?