If you were to gather a group of former athletes who might be able to shed some sort of light on the current path-altering squeeze the coronavirus has put on young athletes, then—to use to swimming analogy—you’d want Rowdy Gaines in the center lane of that pool.

Gaines, a three-time Olympic gold medalist and U.S. Olympic and International Hall of Famer, understands better than most the moments that seem like an end-all blockade in a young athlete’s career. And not just understands, like in the manner of older generations equating the general ups and downs of life, while fidgeting to convey it in the present landscape.

To the current USA Swimming Director of Community Engagement and NBC/ESPN television analyst, he can point to one glaring moment in history that carries a lot of unwanted similarities.

One of the top swimmers in the late ’70s, Gaines had catapulted up the ranks. And the first few months of 1980 were progressing for the then-21-year-old talent—who would earn Swimmer of the Year for the effort, which included world records in both the 100m and 200m freestyle.

But suddenly, Gaines found his path halted in the fateful spring months of 1980 as talks of boycotting the Olympic games seemed more like a reality.

Like so many young athletes focused on achieving their goals and dreams, though, it was not Gaines’ reality.

“We all were in denial, at first,” he told me during a phone interview. Although it’s been 40 years, you can still hear the passion in Gaines’ voice when he talks about swimming, from the earliest days to his current efforts with USA Swimming to get pools re-opened while championing the importance of swimming lessons.

But the tone shifted from defiant to a reserved contemplation, one that typically accompanies something lost—the one that got away—as he continued about the 1980 boycott: “And then, it was anger, and then an incredible depression and sadness. It was an overwhelming grief,” he paused…

While listening to that progression of feelings, some, if not all of it, evoked the now-expected phrasing “that’s just 2020 being 2020″—even though Gaines’ reflection was four decades old.

It makes sense, though. The athletic world has been an unwanted reality of the “‘unknown” in sports (and yes, life), where people have struggled since March to face hypotheticals that asked for concrete answers, all while being shadowed by a new term: COVID-19.

As the cancelations grew this past spring and summer—including the 2020 Olympics—it left athletes in the same uneasy dilemma of having their goals, hopes and dreams abruptly halted as Gaines experienced in 1980.

“The Olympic hopefuls and the high school and even college kids—they have literally lost this year. I have so much empathy for all of them, and what they’re going through right now,” he told me, while also explaining that the circumstances surrounding each event—a pandemic (the health components) versus a political statement—are not an apples-to-apples comparison.

“That was my best year swimming, and it just disappeared,” he added. “So I feel their pain.”

Possibly the most significant part of Gaines’ story, however, is that he considers his missed opportunities nothing more than a “chapter” in his overall tale. And, as many people witnessed or have since read or heard about, the accomplishments after 1980 are what makes his journey so incredible.

But it almost didn’t happen—not without a little boost.

He went back for his senior year at Auburn University in 1981, not because of unfinished business or a motivational fire, but for a more straightforward reason: it was his senior year.

And following that, he quit. “Back then, there was no money in swimming,” he explained. So Gaines, at 22, left the pool and decided to face the unknown…

His decision to hang up the goggles would not be a permanent one, though.

“My dad came to me about six months later, and said ‘Are you going to be able to look at yourself in the mirror for the rest of your life and not say what if? Are you going to have regrets?'”

From that moment—and then Gaines’ decision not to give up or in so quickly—he would go on to win 16 total medals (12 gold) for U.S. Swimming, including those three gold at the 1984 Olympics, at age 25.

At the time, he was the third-oldest athlete ever to win gold at the Olympics.

He would fight and overcome beyond that, too. In 1996, following a battle five years prior with Guillain–Barré syndrome that left him with temporary paralysis, he qualified for the Olympic trials. Again. At 35 years old!

Now, all of that might seem like a super-specific and extreme case to try to use as present-day motivation—in truth, 320 Olympic athletes who made it in 1980 didn’t make it in 1976 or 1984.

But while many today are left wondering how to best approach “this” specific part of the 2020 timeline, what Gaines expresses makes a lot of sense. And it was the same thing he said to himself after his father had laid out that “what if” scenario—which commonly most young athletes would simply roll their eyes at.

“You say, ‘OK. I accept this, and now I need to get motivated to move toward the next chapter of what my life is going to be in the athletic world.'”

A father of four, he also understands that an adult introducing this route might cause a few a head-tilting squints from athletes in their late teens or early-20s. “They’re all about ‘right now,'” he chuckled, “and they want to know, right now, ‘how this is going to be solved?'”

While the answers to that question are still elusive at best, the fall has brought with it a more promising outlook. High school sports are occurring. College sports have made an effort to resume. And the Olympics will happen in 2021—something that Gaines, who will be there as part of the broadcast team, is optimistically excited about, saying that the pro leagues such as the NFL, NBA, and MLB are the perfect study for what to do (and not to do).

Of course, that won’t make up for the time lost, nor will it guarantee every athlete’s story becomes the next Rowdy Gaines tale of perseverance.

But Gaines sees common ground with the athletes dealing with the roller-coaster experience that many can’t relate to.

“With this current situation, they’ll learn to look at the longterm of their life, which is something that I learned at 22,” he explained. “And in the long run, they’ll see it’s a small bump in the road, and it’s going to be OK.

“So don’t give up hope because it will never be too late. I am living proof of that.” 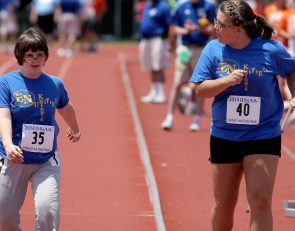 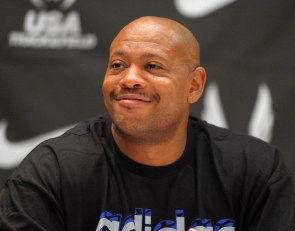