There are many professional athletes who have played for four different teams. However, USC quarterback commit quarterback Jake Garcia appears to be in the rarefied air of playing for a quartet of high schools.

Garcia, a four-star prospect, is heading to Georgia to play for Valdosta. Score another one for bizarre events created by the COVID-19 pandemic.

“I’m really excited about the decision,” Garcia said. “For me, it was big to play as a senior. I need those game reps and this is going to be a big year for me mentally as well in terms of preparing for college.

“With not just California football shut down but the entire West Coast pretty much, Arizona, Nevada, Washington, etc, I knew I had to leave the region. Like I said, I think senior year is a really important time to learn and get better. This will be big for my development and I felt this was the best move for me to make long term.”

As for how Garcia picked Valodsta;

“That’s a big time program,” Garcia said. Football is huge in the South so I’m looking forward to the experience. I’m exited to see what Southern football is all about, plus I have family in Atlanta and they talked about what a great school Valdosta is and what great tradition they have.

“The facilities are amazing but it’s not just about football. They have a great academic reputation as well so it checked off all the boxes for me. I think the move will really benefit me as an early graduate and it will help prepare me when I get to college in January.”

The academic part is fascinating since Garcia plans to enroll in USC in January. That means he would spend about three months in the South.

Spending time at schools has not been a strength for Garcia, who has journeyed from high school to high school while building his reputation as a top quarterback.

He spent the last two years at Narbonne but when former head coach Manny Douglas was forced to resign, Garcia transferred to La Habra. 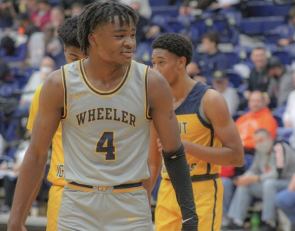 https://usatodayhss.com/2020/report-usc-commit-jake-garcia-to-play-senior-season-in-georgia
Report: USC commit Jake Garcia to play senior season in Georgia
I found this story on USA TODAY High School Sports and wanted to share it with you: %link% For more high school stories, stats and videos, visit http://usatodayhss.com.