Georgia head coach Kirby Smart is using his team’s bye week to hit the road and check out the top target on his 2023 recruiting board.

Smart will be in Louisiana to watch Arch Manning and Isidore Newman take on an undefeated Berkeley Prep team, Isidore Newman head coach Nelson Stewart told 247Sports. Manning has already visited Georgia twice this year and recently made the trip to Athens to watch the Bulldogs play South Carolina.

Manning and Isidore Newman are fresh off their first loss of the season, a 12-7 defeat at the hands of St. Charles Catholic. Manning struggled in the nationally televised affair and things won’t get any easier for the five-star junior quarterback against a Berkeley Prep defense led by 2023 defensive end and Notre Dame commit Keon Keeley.

Manning has been high on Georgia throughout his recruitment, making Smart’s visit to Louisiana a potentially key one in the process. Smart and Georgia offensive coordinator Todd Monken have impressed Manning and the Bulldogs are a serious contender to land the blue-chip signal-caller as a result.

“That’s definitely more of a pro-style offense than some colleges,” Manning previously said of Georgia. “I’m excited and coach Monken is a really good coach and I think they’re going to have a good year and it’s going to be cool watching them in person. Athens is really cool. That was probably the coolest college town there is. Coach Kirby he has a good program. He’s a really laid-back good guy and seems like a guy I want to play for.” 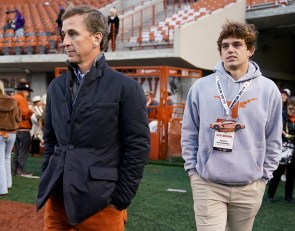 https://usatodayhss.com/2021/arch-manning-kirby-smart-georgia-visit
Georgia HC Kirby Smart to watch Arch Manning on Friday night
I found this story on USA TODAY High School Sports and wanted to share it with you: %link% For more high school stories, stats and videos, visit http://usatodayhss.com.