Chet Holmgren, the top recruit in the class of 2021, has been named the 2021 Morgan Wootten Boys High School Basketball Player of the Year by McDonald’s.

Holmgren is averaging 20.6 points, 12.6 rebounds. 5.2 blocks and 4.5 assists per game for Minnehaha Academy and has scored in double figures every game so far this season. With Holmgren leading the way, Minnehaha Academy currently sits at 20-2 on the year and still in the running for a state title after defeating Byron High School in the Minnesota AAA quarterfinals Wednesday night.

Holmgren recently narrowed down his recruitment to a list of finalists consisting of Georgetown, Gonzaga, Memphis, Michigan, Minnesota, North Carolina and Ohio State. Gonzaga is currently viewed as the favorite to land Holmgren, as his 247Sports Crystal Ball reads 100% in favor of the Bulldogs. Adding to Gonzaga’s appeal is the recent commitment of fellow 2021 five-star recruit Hunter Sallis and the Bulldogs’ run to the Final Four.

“It is great to see the fans (on social media) trying to lead me to their school,” Holmgren said. “I am not letting it play too much into my decision because at the end of the day I have to find what is best for me and my future. Wherever I end up going, I am sure their fans will be the happiest for me.”

While the 2021 Class of All Americans won’t take the court this year, you can see Holmgren be honored during the McDonald’s All American Games hour-long Special on ABC on Saturday, April 3 at 2 p.m. ET. 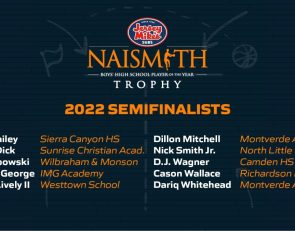