Washington, a former Creighton signee, committed to Kentucky over Arizona, Baylor, Kansas, LSU and Oregon. Creighton released Washington from his National Letter of Intent earlier this year after racially insensitive remarks were made by head coach Greg McDermott.

“Coach Cal’s a straight-forward dude,” Washington recently told 247Sports. “He just laid it on the table. ‘This is what Kentucky is, this is what it’s about. You’re going to come here and bet on yourself every night or this isn’t the place for you.’ That definitely challenges me. It doesn’t scare me at all. Just make sure my confidence stays up and compete night in and night out.”

Washington was a four-star recruit just a couple of weeks ago, but his stock received a major boost in 247Sports’ final class of 2021 rankings update after a standout senior season at AZ Compass Prep. With Washington leading the way, AZ Compass Prep reached the Geico Nationals.

247Sports ranks Washington as the No. 16 overall recruit in his signing class and the No. 3 point guard in the nation.

“Has ball skills and vision to consistently create for others while his jumper is playable to the perimeter. Finishes well at rim due to physical tools. Has ability to defend both guard positions at next level due to instincts and length. Projects as high major starter with professional upside if game continues to progress.” 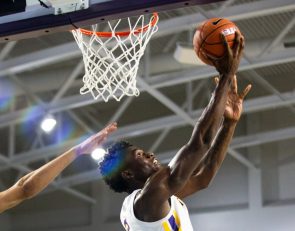 https://usatodayhss.com/2021/five-star-pg-tyty-washington-commits-to-kentucky
Five-star PG TyTy Washington commits to Kentucky
I found this story on USA TODAY High School Sports and wanted to share it with you: %link% For more high school stories, stats and videos, visit http://usatodayhss.com.