For years, Hamilton High School (Chandler, Ariz.) was the powerhouse of Arizona. To win a championship, one had to beat the Huskies. More often than not, Hamilton took the trophy.

But over the past half-dozen years, their stature fell. Only in the last few seasons have they started rising again to place themselves among the best schools in Arizona.

Over 65 seconds on Friday night, against one of the prolific powerhouses of the country in Bishop Gorman (Las Vegas, Nev.), Hamilton proved they have reached that echelon.

The Huskies scored 15 points in the final minute to snatch victory out of the hands of the No. 7 Gaels, taking home the 25-24 win.

With 1:05 to play, Hamilton made a 46-yard field goal to cut the deficit to 24-10. They recovered an onside kick and, about 30 seconds later, scored a touchdown.

The Huskies lined up for another onside kick. Once again, they recovered.

Nineteen seconds of game time later, Hamilton scored another touchdown to cut the deficit to one.

The Huskies elected to go for a two-point conversion. They had recovered two onside kicks in less than a minute; who was to say they couldn’t convert this?

They did. West Virginia quarterback commit Nicco Marchiol rolled to his left with his eyes on the end zone, took it himself, and dove for the conversion. Here are the full highlights from that final minute of play:

In taking down No. 7 Bishop Gorman, Hamilton has its signature moment of the season. But the Huskies won’t be able to rest with their 3-0 record. On deck is Centennial (Peoria, Ariz.), another dynamic Arizona team.

Bishop Gorman, meanwhile, suffered its first loss of the season. The Gaels will now return to Nevada to play its first game in their home state this season. Arbor View (Las Vegas) is on deck, and the Gaels will have in-state opponents the rest of the year. 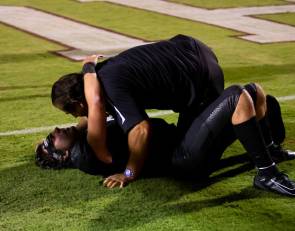 https://usatodayhss.com/2021/hamilton-comeback-win-over-bishop-gorman
No. 24 Hamilton scores 15 points in final minute to beat No. 7 Bishop Gorman
I found this story on USA TODAY High School Sports and wanted to share it with you: %link% For more high school stories, stats and videos, visit http://usatodayhss.com.