Javonte King just made maybe the best catch of the year.

His unreal 38-yard grab sets up an easy Blackfoot touchdown. Broncos have their first lead of the night.

To truly glimpse just how much talent high school football players have, you must venture outside the hotspots of the game. Occasionally, you’ll find a player who can make plays like Ja’Vonte King, a junior wide receiver from Blackfoot High School in Idaho.

King, with a tie game in the third quarter, rose up over a defender and made a leaping 38-yard grab that would make Odell Beckham Jr. proud.

With a defender draped all over him, King went full extension with his right arm to make a one-handed catch and set Blackfoot up for a touchdown not long after in the drive.

Check out these photos taken by Kyle Riley of the Idaho State Journal:

King tacked on a 45-yard touchdown to finish the game with five catches for 137 yards.

He helped Blackfoot get its first win of the season. After dropping the first two games, Blackfoot took down Snake River (Blackfoot, Idaho) 35-21.

King is a 6-foot-4, 200-pound junior and a two-sport athlete, according to the Idaho State Journal. He doesn’t have any college offers on his 247Sports page, but if he keeps making catches like this, that could soon change. 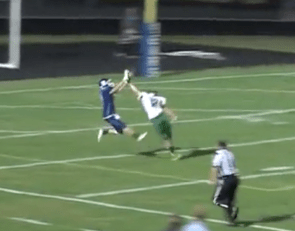 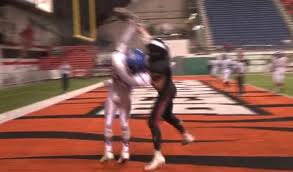 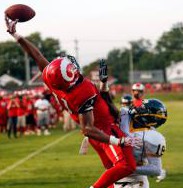