Some High School Football programs got a head start to the year, playing their first games of the 2022 season this past Friday night.

There are still a lot of great quarterbacks that have yet to make their debut. For now, one standout worth mentioning is Isaac Wilson from Corner Canyon (Utah) – who put up some video game numbers in the Chargers’ dominant 45-7 win over Herriman (Utah).

Wilson went 21/30 for 450 yards and six touchdown passes, including this off-platform beauty.

Isaac Wilson (@Isaac_kawika) with an off platform throw to Quinn Hale (@QuinnHale4) for a 45 yard TD #CCHS pic.twitter.com/SdQR2UdeWr

Wilson (5-foot-11, 166 pounds) is a four-star recruit from the class of 2024 that is as yet uncommitted. He has nine offers so far, including BYU, Arizona, Idaho State, Miami, Oregon, Oregon State, San Diego State, San Jose State and Weber State.

Wilson’s older brother Zach played his college ball at BYU and is now the starting quarterback for the New York Jets. Unfortunately, the elder Wilson suffered a knee injury in his team’s first preseason game and is expected to miss the next few weeks.

As for Isaac, next on the schedule for Corner Canyon is a road game against Bishop Gorman (N.V.) — another team that is no stranger to the USA TODAY Sports Super 25.

When does football season start? Here's a look at high school football start dates for each state in 2022 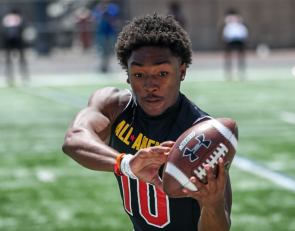 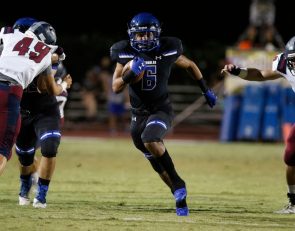