The CrawsOver, a basketball Pro-Am league in Seattle run by former NBA guard Jamal Crawford, has reached new heights with stars like LeBron James and Jayson Tatum playing this year.

A rebrand of the Seattle Pro-Am, this event’s popularity had reignited recently and hit the eye of more people last year when Isaiah Thomas dropped 81 points in a game. This season, which opened July 9, has been advertised as the biggest yet.

Crawford appeared on NBA TV to talk about the event. He said that the tournament is special because it’s the only way kids living in Seattle can see their favorite players play.

The event is free for all who attend.

“A lot of kids in this area especially have only seen their favorite players whether it be on TV or on video games,” Crawford said on NBA Today. “To see their favorite players right there in person, to reach out and touch them — and they might have an interaction with you — and if you’re a kid working to get better and to dream about being on that level, that makes your dreams more realistic.”

On NBA Today, Jamal Crawford explained that because kids in markets like Seattle often only get to see their favorite NBA players on TV, “I ask the kids who they want to see and I try to go get ‘em. And it’s free.” He did that in a big way today @thecrawsover. Very cool to see. pic.twitter.com/mPaDHRj4TQ

He said he asks the kids who they want to see and Crawford attempts to draw those stars to the event.

While the games are free, good luck getting in when it involves a star like James. Videos of long lines and tents from Friday night have been tweeted as people wait to get into the arena.

This what the line looks like to get into the @thecrawsover right now for the game tomorrow to see @KingJames
Game gone be off the chain! Consider the city shut down tomorrow 🫡 @NBA @JCrossover @espn @overtime pic.twitter.com/BdYb1NSpgG

Checking in at 6:30AM from the #crawsover line for @KingJames. Does #Seattle need an NBA team 🤔 @JCrossover did this 🙏 pic.twitter.com/6a2cSoT9if

James and Tatum aren’t the only well-known NBA players competing. Dejounte Murray, rookies Paolo Banchero and Chet Holmgren, and Isaiah Thomas are among others taking part.

The full rosters, found on the CrawsOver website, are littered with other NBA players among the amateur athletes.

All this comes back to one of the big questions always under debate: Should Seattle have a team of its own? With excitement like this for the league and players, the passion is certainly there. 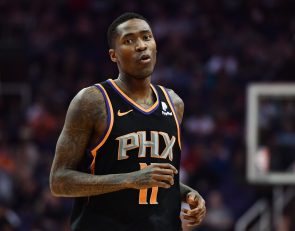 https://usatodayhss.com/2022/jamal-crawford-crawsover
Jamal Crawford explains how he gets NBA stars to The CrawsOver
I found this story on USA TODAY High School Sports and wanted to share it with you: %link% For more high school stories, stats and videos, visit http://usatodayhss.com.