The No. 1 recruit in the class of 2024 is Chandler (Ariz.) quarterback Dylan Raiola. He appeared to be on his way to play for Ryan Day at Ohio State. However, Raiola decommitted from the Buckeyes one month ago. Now, it’s anybody’s guess where he will wind up playing his college ball.

According to Raiola’s father Dominic, Dylan’s recruitment is “wide open,” per Steve Wiltfong at 247 Sports.

However, there are some rumored contenders to get Raiola’s commitment. That list includes Nebraska, where new head coach Matt Rhule has reportedly made an impression on Raiola and his family. The Cornhuskers also have an inside track as their offensive line coach is Dylan’s uncle.

Rhule is one of several coaches who have visited Raiola at Chandler recently. Other schools that have sent delegations include Michigan (who sent coach Jim Harbaugh), Oklahoma, USC and Arizona State, per 247 Sports. He also has family connections at TCU and has made official visits to Baylor, Florida State, Clemson, Oklahoma and Texas, among others.

According to Chad Simmons at On3, Georgia, Oregon and USC are the main contenders to watch. Raiola raised some eyebrows after praising the Bulldogs following their second-consecutive national championship – calling Georgia the “cream of the crop” in college football.

Whichever school lands Raiola will be getting a rare talent at the game’s most-important position. He’s one of only a handful of recruits all time to have a perfect composite score. 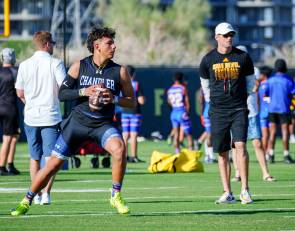 Top '24 QB Dylan Raiola: 'Georgia is the cream of the crop' 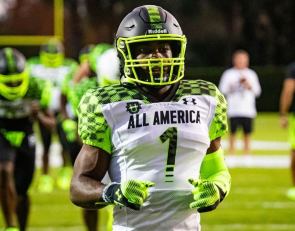