August has already brought changes to the recruiting landscape, and the month is just a week old. A new commitment to Miami pushed the Hurricanes’ 2023 class over Clemson for the ACC lead — for the time being — and a player who had been committed to Ohio State for a year flipped his pledge to Alabama.

On Friday, four-star offensive lineman Connor Lew committed to Mario Cristobal and Miami. Recruiting sites differ on him, with his 247Sports Composite placing him as a three-star, but 247Sports itself is high on the lineman, ranking him as the 14th-best IOL, 32nd-best player in Georgia and, most importantly, a four-star prospect.

“You have a head coach who is an offensive line guy and develops offensive linemen alongside a good offensive line coach, Coach Mirabal. I’ve been saying this all along, that’s truly special,” he said to 247Sports. “Developing O-linemen is kind of what they do. They’ve proven that.”

With Lew’s commitment, Miami’s class is now ranked above that of Clemson and is at the top of the ACC. The Hurricanes have five players in the top-100, including sixth-ranked Francis Mauigoa. Clemson has led the ACC for five recruiting cycles in a row, according to 247Sports. While Miami has the lead, the Tigers are hot on their tail, with more five- and four-star recruits in the 2023 group than the Hurricanes.

Back in August 2021, tight end Ty Lockwood committed to Ohio State. The No. 9 tight end in the country and a top-150 player in the class was set to be a Buckeye.

According to 247Sports, Lockwood visited Alabama’s campus in late July and was impressed by the facilities, the atmosphere inside the tight end room, and with head coach Nick Saban.

“The vibe I got and being able to connect with the coach the way I did and players the way I did, you get that gut feeling when something feels right. That’s exactly what I felt. I went there, the vibe was amazing. It’s everything you can ask for, Bama,” he said to 247Sports.

Lockwood did pay compliments to Ohio State, saying that he has respect for the program and that the Buckeyes helped him develop into who he is today.

“You have to do the best for yourself. This is a business and this is a little bit better of a fit for me relationship wise and football wise,” he said.

The tight end is listed at 6-foot-5 and 225 pounds. Over his sophomore and junior seasons at Independence High School (Thompson’s Station, Tenn.), he recorded 85 receptions for 1,068 yards and five touchdowns in 21 games, according to Maxpreps. 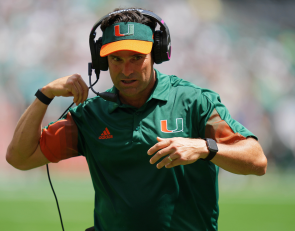