Ohio State won the recruiting race this week when they earned the commitment of Chaminade-Madonna (Fla.) five-star prospect Jeremiah Smith. He’s ranked the No. 1 wide receiver in the class of 2024 and is the second-best prospect overall in the nation.

Smith (6-foot-3, 185 pounds) joins a program that has become synonymous with producing NFL-level talents at wide receiver. Last year alone, two Ohio State receivers were picked in the top 11 in the draft and there are eight others around the league. Smith has all the tools he needs to join them.

On Thursday, Hayes Fawcett at On3 reported the decision and Smith confirmed the news himself on social media.

Smith is coming off a sensational Junior season, having totaled 58 catches for 1,073 receiving yards and 20 touchdowns. He also got some experience as a punt returner.

He had offers from 38 other schools but chose Ohio State, whose 2024 recruiting class is now ranked No. 6 in the nation – trailing Florida State, Alabama, Notre Dame, Georgia and LSU…

LSU adds another recruit to DBU

Speaking of LSU, nobody is pumping out defensive backs better than that program these days.

The team has embraced the moniker of “DBU,” as they continue to attract elite corners and safeties from around the country. On Thursday, Martin (Texas) Senior Javien Toviano became the latest recruit to jump on board.

Javien Toviano: "LSU is DBU. We're trying to bring that back."

A massive win for Brian Kelly and Co. in the Lone Star State. pic.twitter.com/oRwXSgll06

Toviano (6-foot-0, 185 pounds) is the sixth-ranked cornerback in his class and the second-best that had yet to make a college commitment. (The best is IMG Academy (Fla.) five-star recruit Desmond Ricks, who may be joining Toviano at LSU but hasn’t decided.)

Over the last two seasons, Toviano has posted two interceptions, seven passes defensed and two fumble recoveries. He has also played some running back, totaling 728 yards and 10 touchdowns on 98 carries.

LSU also landed three-star tight end Jackson McGohan earlier this week.  Thanks to these latest commitments, LSU’s 2023 class has inched a fraction ahead of Notre Dame, taking the No. 3 spot in the nation.

Louisville is trying to reset its football program under new head coach Jeff Brohm. He has a big weekend ahead of him as he will be trying to pry away another one of LSU’s major CB commitments and securing two of the Cardinals’ most-important recruits. Here’s who’s coming in, per Rivals.

Austin (6-foot-1, 180 pounds) committed to LSU back in May, but Louisville is still considered a contender to get him. He is ranked No. 12 among cornerbacks in this class and No. 9 overall in California. If they can flip him, Austin would be the third corner in this recruiting cycle for the Cardinals.

The starting QB for the best high school team in the country, Clarkson (6-foot-0, 190 pounds) came on board for Louisville nearly a year ago, but a lot has changed since then. Brohm may have to convince Clarkson he’s still their quarterback of the future, as Clarkson has offers from 23 other schools waiting.

Sanker (6-foot-4, 305 pounds) also committed to Louisville several months ago, but Auburn, Mississippi State and Cincinnati have reportedly been trying to flip him.. Sanker is ranked No. 8 among interior offensive linemen in his class and No. 12 overall in the state of Georgia.

Twitter reacts to Auburn pulling off two flips in one day

The biggest Wisconsin football recruiting news of the week 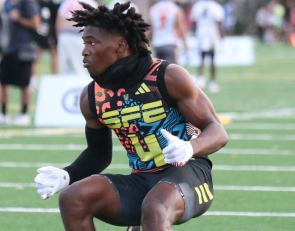